From the Archives: Thanksgiving with the Presidents

November 21, 2012 at 10:00 AM ET by Presidential Libraries of the National Archives and Records Administration
Twitter Facebook Email
Summary:
See how past Presidents marked the Thanksgiving holiday, and learn more about how the tradition began in the United States.
[[nid:186251]]

Did you know that before the 1940s Thanksgiving was not on a fixed date but was whenever the President proclaimed it to be?

George Washington issued the first Presidential proclamation for the holiday in 1789. That year he designated Thursday, November 26 as a national day of “public thanksgiving.” The United States then celebrated its first Thanksgiving under its new Constitution. Seventy-four years later, in 1863, Abraham Lincoln declared Thanksgiving a national holiday on the last Thursday in November.

By the beginning of Franklin D. Roosevelt’s Presidency, Thanksgiving was not a fixed holiday; it was up to the President to issue a Thanksgiving Proclamation to announce what date the holiday would fall on. Tradition had dictated that the holiday be celebrated on the last Thursday of the month, however, this tradition became increasingly difficult to continue during the challenging times of the Great Depression.

Roosevelt’s first Thanksgiving in office fell on November 30, the last day of the month, because November had five Thursdays that year. This meant that there were only about 20 shopping days until Christmas and statistics showed that most people waited until after Thanksgiving to begin their holiday shopping. Business leaders feared they would lose the much-needed revenue an extra week of shopping would afford them. They asked President Roosevelt to move the holiday up from the 30th to the 23rd. He chose to keep the Thanksgiving holiday on the last Thursday of the month, however, as it had been for nearly three-quarters of a century.

In 1939, with the country still reeling from the effects of the Great Depression, Thanksgiving once again threatened to fall on the last day of November. This time President Roosevelt did move Thanksgiving up a week to the 23rd. Changing the date seemed harmless enough, but it proved to be quite controversial. Small business owners felt it put them at a disadvantage and they sent letters of protest to the President.

As opposition grew, some states took matters into their own hands and defied the Presidential proclamation. Some Governors declared November 30th as Thanksgiving. And so, depending upon where one lived, Thanksgiving was celebrated on the 23rd and the 30th. This was worse than changing the date in the first place. Families who lived in states such as New York did not have the same day off as family members in states such as Connecticut! Family and friends were unable to celebrate the holiday together.

In this telegram from November 13, 1940, Leota and Helen Care ask FDR what day they should serve their turkey. 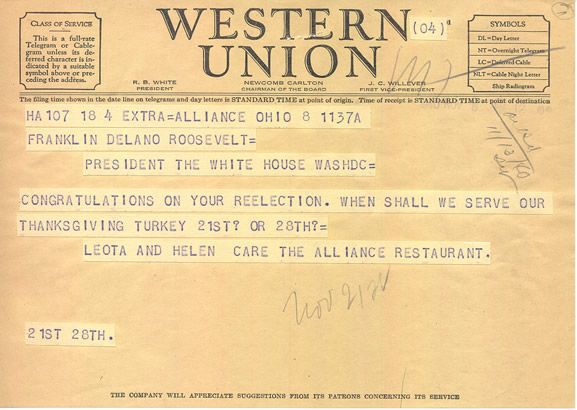 Six years later, another tradition was formally established when Harry S. Truman presided over the first live turkey presentation by the Poultry and Egg National Board. The event inaugurated a lighthearted ceremony that now occurs annually at the White House.  Initially, the presentation birds were intended for the Thanksgiving meal. In fact, among our holdings are photos from 1963 and 1967 in which the presentations birds given to John F. Kennedy and later, Lyndon B. Johnson, wear signs that read, “Good Eating Mr. President.”

Here is a photo of the 1967 presentation to Lyndon B. Johnson at the White House. 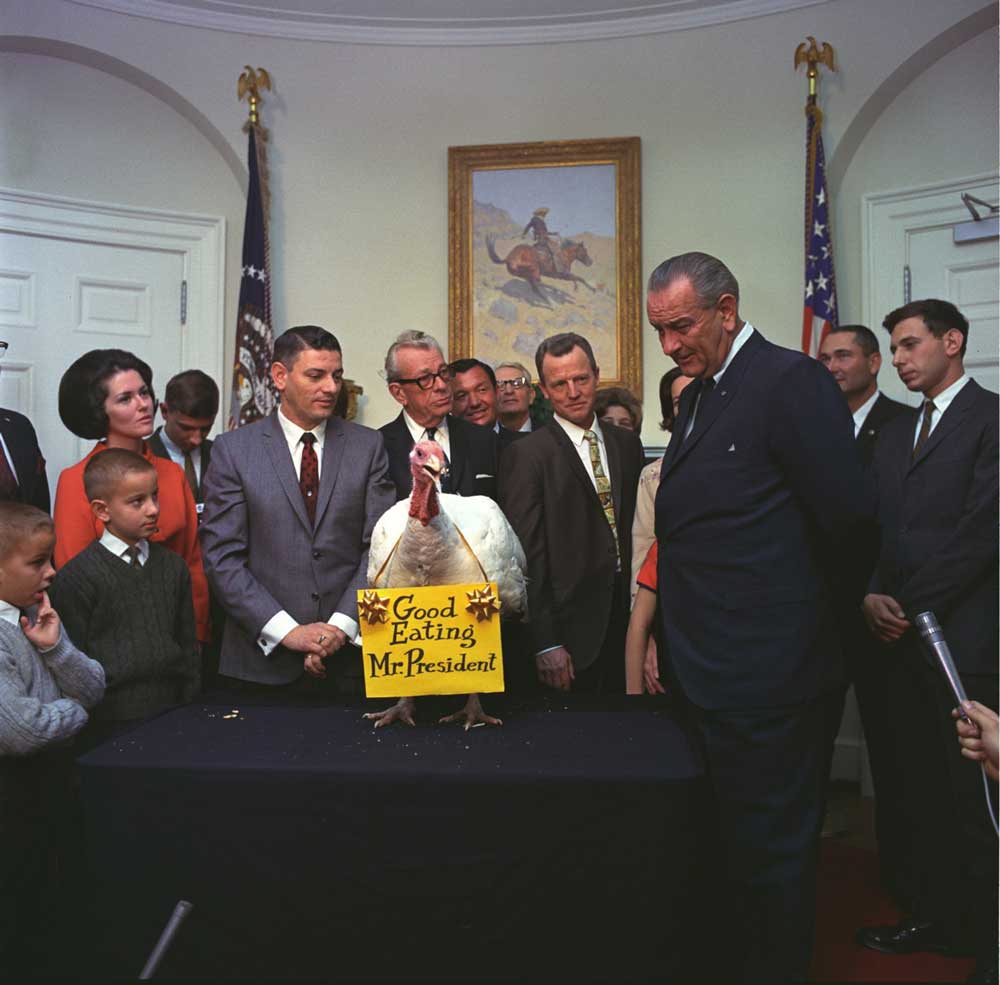 Annual presentation of the Thanksgiving turkey - Senator Everett Dirksen and representatives from the poultry industry and farm organizations present a turkey to Lyndon B. Johnson in the Fish Room of the White House. The turkey has a sign around its neck that says "Good Eating Mr. President,” November 16, 1967. (Photo credit: U.S. National Archives and Presidential Libraries )

It was not until November 14, 1989 that President George Bush officially “granted a Presidential pardon” to a turkey.  Below is a photo of President Bush and the pardoned bird from that year’s presentation. 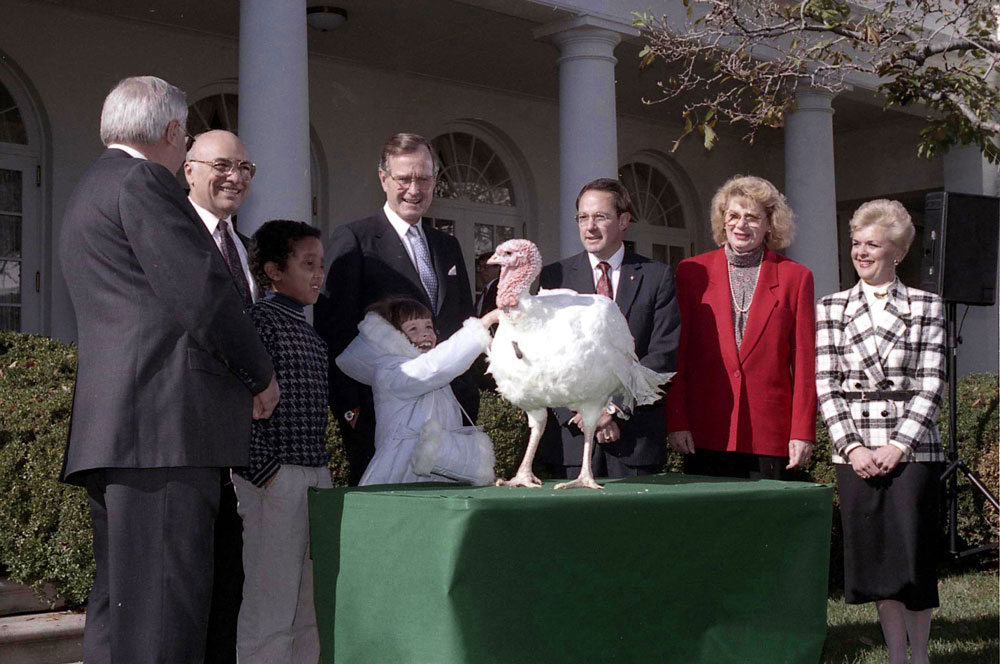 For highlights of Presidents celebrating Thanksgiving over the years, here’s a gallery from the holdings of the U.S. National Archives and the 13 Presidential Libraries across the country.