November 21, 2012 at 12:30 PM ET by Kirsten White
Twitter Facebook Email
Summary:
Navy Secretary Ray Mabus announced that the Navy’s next Virginia-class attack submarine will be named the USS Delaware – and that it will be sponsored by Dr. Jill Biden, a longtime Delaware educator and proud military mom. 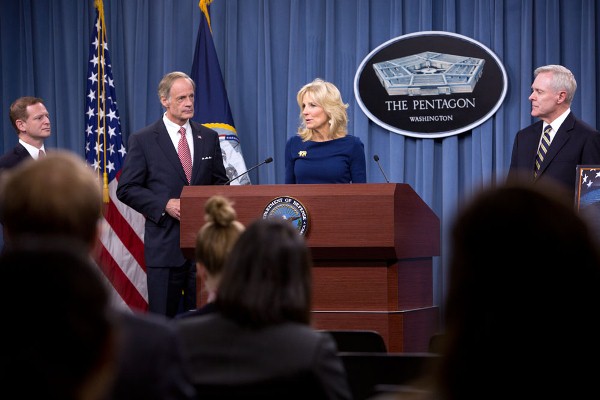 Dr. Jill Biden speaks at a press conference with Secretary of the Navy Ray Maybus, Senator Tom Carper, and Delaware Lt. Governor Matt Denn, announcing the naming of the SSN 791 as the USS Delaware, in the Briefing Room at the Pentagon, in Arlington, Virginia, Nov. 19, 2012. (Official White House Photo by David Lienemann) November 19, 2012.

Earlier this week at the Pentagon, Navy Secretary Ray Mabus announced that the Navy’s next Virginia-class attack submarine will be named the USS Delaware – and that it will be sponsored by Dr. Jill Biden, a longtime Delaware educator and proud military mom.

At the announcement, Secretary Mabus said the Navy names its ships for states and other places in America to serve as a visible representation of America in every port around the world and that there is “always a strong connection between the people of a state and the ship that bears its name.”

“It's a special honor for me to sponsor this submarine, because I'm such a proud military mom,” Dr. Biden said. “Four years ago … I stood in Dover, Delaware, watching as our son, Beau, prepared to deploy to Iraq with the Delaware Army National Guard. I remember it like it was yesterday. And this year, I'm looking forward to standing with our son, Hunter, when he is commissioned as an ensign in the United States Navy.  He follows in the footsteps of two of his grandfathers, who have also served in the Navy.

Secretary Mabus also recognized Dr. Biden for her work with First Lady Michelle Obama on the Joining Forces initiative, “providing support and expanding opportunities, for veterans and active-duty personnel and their families.”

Dr. Biden said that the Navy tradition of having civilian-sponsored vessels “helps to cement the critical connection between our service members and the civilians back home who love them, miss them, and owe them a debt of gratitude.”