November 26, 2012 at 5:30 PM ET by Valerie Jarrett, Samantha Power
Twitter Facebook Email
Summary:
In Cambodia, Valerie Jarrett and Samantha Power meet with U.S. Ambassador William Todd, trafficking survivors, as well as some of our partners who are working to combat the crime.

On each leg of his trip to Southeast Asia this week, President Obama raised with foreign leaders one of his priority human rights issues: ending human trafficking, a form of modern-day slavery.

In September, the President spoke passionately about this issue, noting that human trafficking is an issue that ought to concern every person, community, business, and nation around the world. Making good on those words, during the trip the President secured new commitments from the members of the Association of Southeast Asian Nations (ASEAN) to strengthen and harmonize their anti-trafficking laws, and established a landmark joint plan with the Government of Burma to help eliminate that country’s use of forced labor, including child soldiers.

At the President’s request, on Tuesday we had the pleasure of joining U.S. Ambassador to Cambodia William Todd in gathering with trafficking survivors in Cambodia, as well as some of our partners who are working to combat the crime. The conversations we had with trafficking survivors and advocates on the front lines of this fight left us feeling inspired by their courage, and encouraged by some of the progress made to date, but also concerned about the ongoing vulnerability of Cambodians to human trafficking. 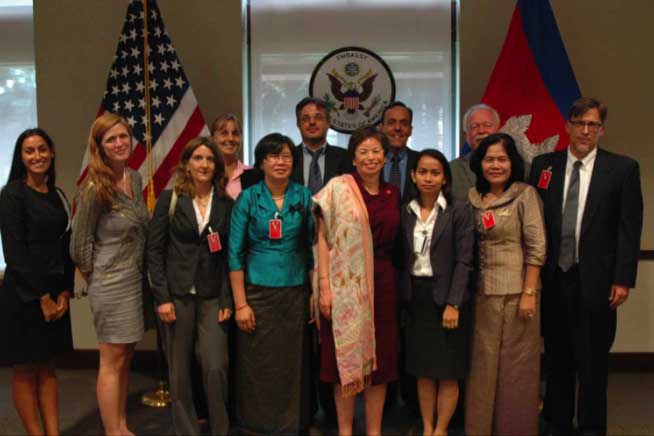 Ending human trafficking is a top U.S. priority in Cambodia. To get there, progress will have to be made in preventing trafficking, protecting survivors, and holding offenders accountable. Our partners help educate the public to understand the key ways in which traffickers seek to exploit the vulnerable, particularly those migrating to neighboring countries for work. They also provide victims with rehabilitation services and vocational training, and train law enforcement personnel to more effectively investigate and prosecute perpetrators.

We first met a group of young Cambodians who were part of the U.S.-funded MTV EXIT (End Exploitation and Trafficking) campaign. MTV EXIT is providing youth in Cambodia with training and mentorship on using art, drama, and technology as tools for communicating messages about safe migration and the dangers posed to at-risk communities – especially Cambodia’s rural poor. We watched these imaginative youth perform a short skit in which a child resisted the manipulations of a recruiter, and we viewed their paintings depicting the ways in which trafficking networks strike.  We were told that these vivid paintings would soon be hanging in villages in which Cambodians are known to be recruited and exploited.

We also met with several survivors of labor and sex trafficking who receive U.S.-funded legal and rehabilitation assistance. After surviving the unimaginable, these brave men and women described their efforts to speak out about their experiences, to try to ensure the perpetrators are held accountable, and to teach others how to protect themselves, all the while helping reduce the stigma surrounding this crime. It was moving to be in the presence of their remarkable courage, as well as to witness the indefatigable work of the shelters and legal aid organizations that assist them.

Lastly, we sat down with anti-trafficking non-governmental leaders to discuss their efforts, particularly the rarity with which offenders are prosecuted. Last year, there were 62 trafficking-related convictions in Cambodia, an increase from the year before, but nevertheless a relatively small number given the scope of the challenge. Indeed, the leaders we met with identified prosecution as the weakest link in Cambodia’s efforts to combat human trafficking, reporting that survivors are often treated like criminals, and have little hope of seeing justice meted out to their victimizers.

The roundtable participants noted the important gender dimensions to trafficking. While a significant percentage of trafficking in Cambodia involves men being lured into forced labor, the advocates noted that female trafficking survivors often have a more difficult time reintegrating into society. They also noted that until the broader society values its women as much as its men, women will continue to be vulnerable to exploitation.

Participants described some steps that the Cambodian government had taken to combat trafficking, but stressed the need to do far more, given the horrors being experienced by those living in slavery. As President Obama said during his meeting with Cambodian Prime Minister Hun Sen, if the Cambodian government steps up to prioritize fighting corruption, strengthening the rule of law, and protecting the rights of all Cambodians, including the vulnerable, it will find a willing partner in the United States. In the meantime, we will continue to support education aimed at prevention, law enforcement training, and the rehabilitation of those who have survived this horrible crime.