November 26, 2012 at 3:30 PM ET by Jason Furman
Twitter Facebook Email
Summary:
If Congress doesn't act, the typical middle-class family will see their taxes go up by $2,200 next year, negatively affecting businesses and retailers across the nation.

Today, as we move into the holiday shopping season, the National Economic Council and the Council of Economic Advisers released a report called The Middle-Class Tax Cuts’ Impact on Consumer Spending and Retailers. This report provides new analysis on the impact to retailers and consumer spending if Congress fails to act to avoid taxes going up on 98 percent of Americans at the end of the year.

If Congress doesn't act, middle-class families will see their income taxes go up on January 1st. The typical middle-class family will see their taxes go up by $2,200 next year, negatively impacting businesses and retailers across the nation. The President has called on Congress to take action and stop holding the middle class and our economy hostage over a disagreement on tax cuts for households with incomes over $250,000 per year.

Our economy can’t afford that right now. New analysis by the President’s Council of Economic Advisers (CEA) finds that: 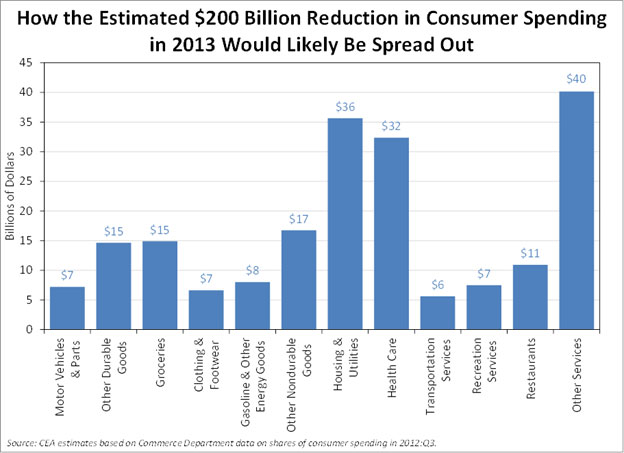 American consumers are the bedrock of our economy, driving more than two-thirds of the overall rise in real GDP over 13 consecutive quarters of economic recovery since the middle of 2009:

And as we approach the holiday season, which accounts for close to one-fifth of industry sales, retailers can’t afford the threat of tax increases on middle-class families.

The President has called on Congress to take action and stop holding the middle class and our economy hostage over a disagreement on tax cuts for households with incomes over $250,000 per year. The Senate has passed this bill and the President is ready to sign it.

President Obama understands we must take a balanced approach to reduce our deficit, that’s why he has laid out a $4 trillion deficit reduction plan that asks the wealthy to pay a little more and preserves the investments we need to grow the economy.  The President has already signed $1.1 trillion in spending cuts and he looks forward to working with Democrats and Republicans on a balanced approach to further reduce our deficit. This is an important moment not just to avoid the fiscal cliff—but to lay the groundwork for an economy that will support a healthy middle class, restore economic certainty, and lead to long-term job growth.