During the East Asia Summit in Phnom Penh on November 20, President Obama asked us to join with U.S. Ambassador to Cambodia William E. Todd in gathering Cambodian human rights organizations to discuss the state of human rights and civil society in Cambodia.

The courageous individuals we met represented many others who advocate daily, sometimes at personal risk, for the protection and strengthening of human rights in Cambodia. Much of our conversation centered around three issues:  land rights, the rule of law, and free and fair elections. 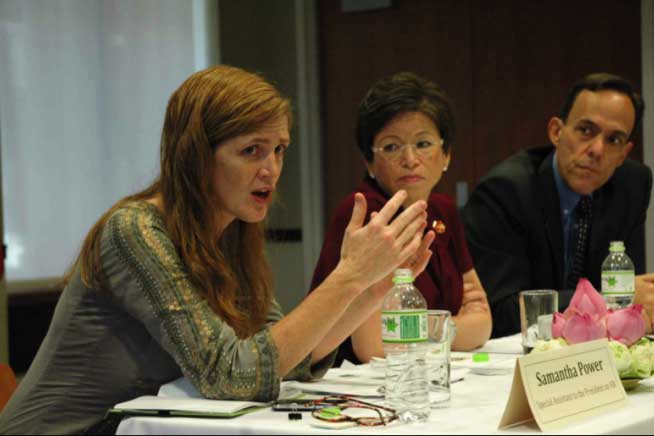 Land tenure issues are a serious problem in Cambodia. Due to the lack of a dependable titling system and a weak judiciary, conflicts frequently arise over land rights. Even more troubling, the Cambodian government has at times forced families to relocate from their homes without due process or compensation. Residents who have protested these steps have been harassed, and some have been arrested and convicted on criminal charges.

Cambodia’s weak judicial system also faces many challenges. Suspects often spend long periods in pre-trial detention – Cambodian law allows for such detention for up to six months for misdemeanors and 18 months for felonies. At times, outspoken activists and opposition politicians have been given lengthy prison terms based on questionable evidence. Most notably, a well-known critic of the Prime Minister and owner of an independent radio station was recently imprisoned for 20 years based on what many observers described as inadequate evidence. Charges of defamation or disinformation – or threats of such charges – have been used as a means to intimidate journalists and human rights activists alike.

Finally, the Cambodians we met with described the steps that could be taken to improve a political system in which many Cambodians appear to have lost faith. The National Elections Committee, responsible for organizing free and fair elections, is not seen to be independent. There are also broad concerns that, during the national elections scheduled for July 2013, Cambodians may be denied the opportunity to choose from the broadest range of opposition candidates who wish to be part of the political process.

During our roundtable, Ambassador Todd and we discussed with Cambodia’s courageous human rights defenders the ways in which the U.S. Government is working to support their efforts to bring about a more just and democratic society. The United States aims to strengthen the demand for democracy, accountability, and human rights – especially among Cambodian youth – while providing support to NGOs advocating for political reform. Our embassy sponsors town hall meetings for Cambodians to discuss areas of concern with their elected officials.  U.S. officials work with local NGOs to investigate land grabbing, illegal arrest and detention, and obstruction of freedom of expression and assembly, while providing legal aid to victims.  And Ambassador Todd and his team are helping to build the next generation of leaders through support for youth civic education -- last year reaching over 370,000 youth through these programs.

Our message to human rights defenders reinforced that of President Obama, who, when he met with Cambodian Prime Minister Hun Sen, urged progress on these very issues, stressing that the promise of Cambodia’s great people will only be fully realized when human rights are respected and all voices are heard.