November 28, 2012 at 6:28 PM ET by Colleen Curtis
Twitter Facebook Email
Summary:
This year's theme celebrates the many joys of the holiday seasons: the joy of giving and service to others; the joy of sharing our blessings with one another; and the joy of welcoming our friends and families as guests into our homes over these next several weeks. 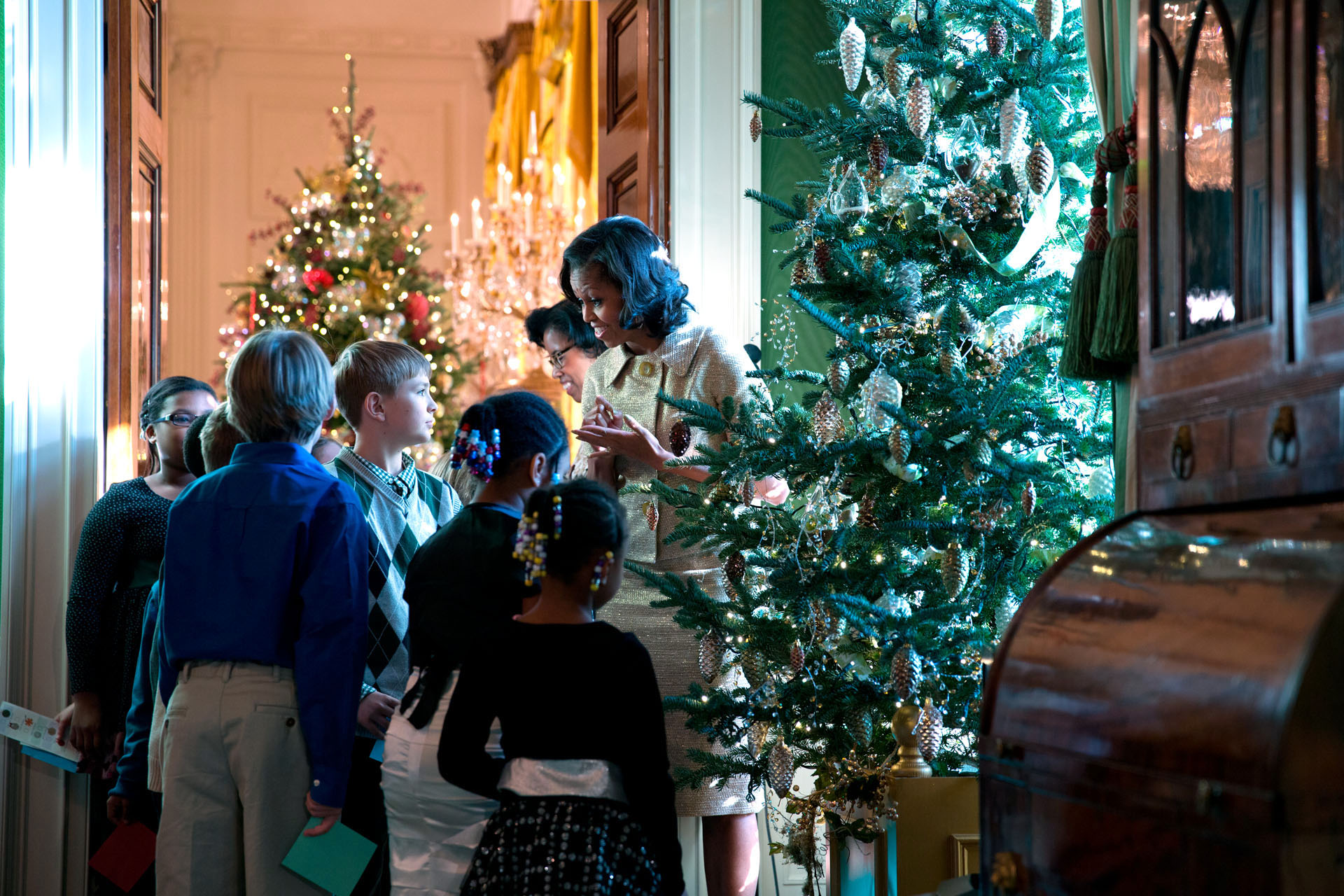 The theme of the 2012 White House Holiday decorations is "Joy to All".

The custom of selecting an official holiday theme began in the 1960s when First Lady Jacqueline Kennedy created a nutcracker-themed Christmas for her daughter Caroline. And in welcoming a crowd of military families who were the first of more than 90,000 anticipated visitors, First Lady Michelle Obama explained that this year's theme "celebrates the many joys of the holiday seasons: the joy of giving and service to others; the joy of sharing our blessings with one another; and, of course, the joy of welcoming our friends and families as guests into our homes over these next several weeks."

The 2012 decorations embrace several beloved White House traditions: There are 54 decorated trees throughout the residence, and four of them on display in the Grand Foyer are trimmed with ornaments that pay tribute to the holiday legacies of former First Ladies dating back to Mrs. Kennedy, including some original ornaments from years past.

Two of the rooms pay tribute to the service and sacrifice of our Armed Forces and their families. The walls of the East Landing are adorned with wreaths crafted with red, white, and blue yarn, and a tree decorated with red, white and blue ornaments completes the space. The official White House Christmas tree, which stands tall in the center of the Blue Room, honors the courageous service of the troops, veterans, and military families who serve our country with pride. The 18-foot-6- inch Fraser Fir from Jefferson, North Carolina is trimmed with ornaments decorated by military children living on U.S. Military Bases all over the world, and these one-of-a-kind ornaments honor their parents’ commitment to service. 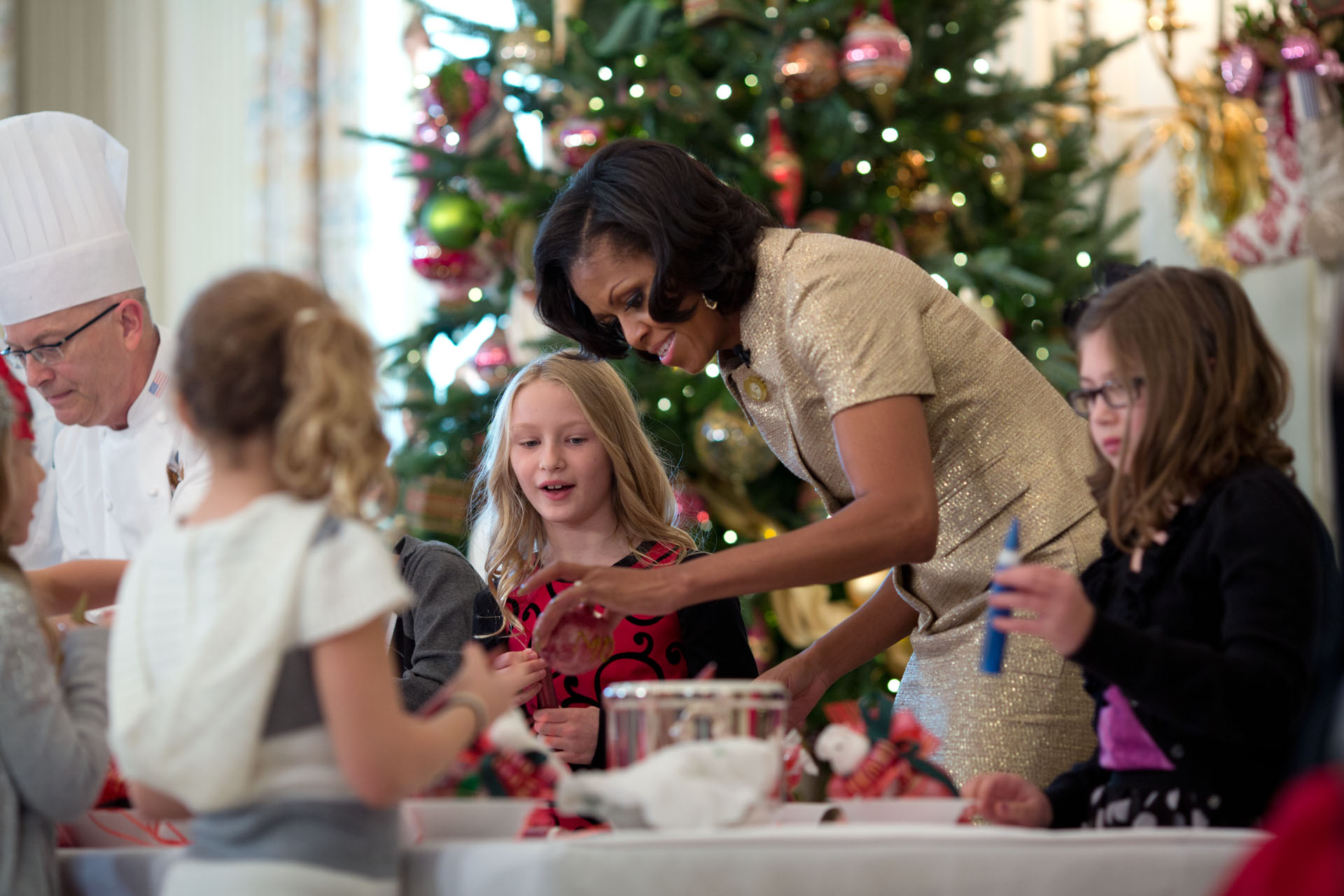 Other traditions that continue include the annual representation of the White House in pastry form: This year, the White House Gingerbread House was constructed from more than 175 pounds of gingerbread and modified gingerbread, and more than 50 pounds of chocolate. The base of the House, a combination of wheat, rye, and white-flour gingerbread, mimics the color of the sandstone house prior to 1798, when the president's residence was first painted white.

First Dog Bo Obama also makes a return. A life-size replica of the First Family’s Portuguese Water Dog --made out of 18,000 one-inch black pompoms and 2,000 white pompoms -- is the centerpiece of the East Garden Room, and more than 40 handmade “Bo-flakes” ornaments hang from the trees throughout the White House. White House staff have prepared a special activity for all of the young people who visit during the holiday season: They’ll receive a bookmark with a checklist that instructs them to find the “Bo-flake” ornament hanging in eight rooms of the White House. 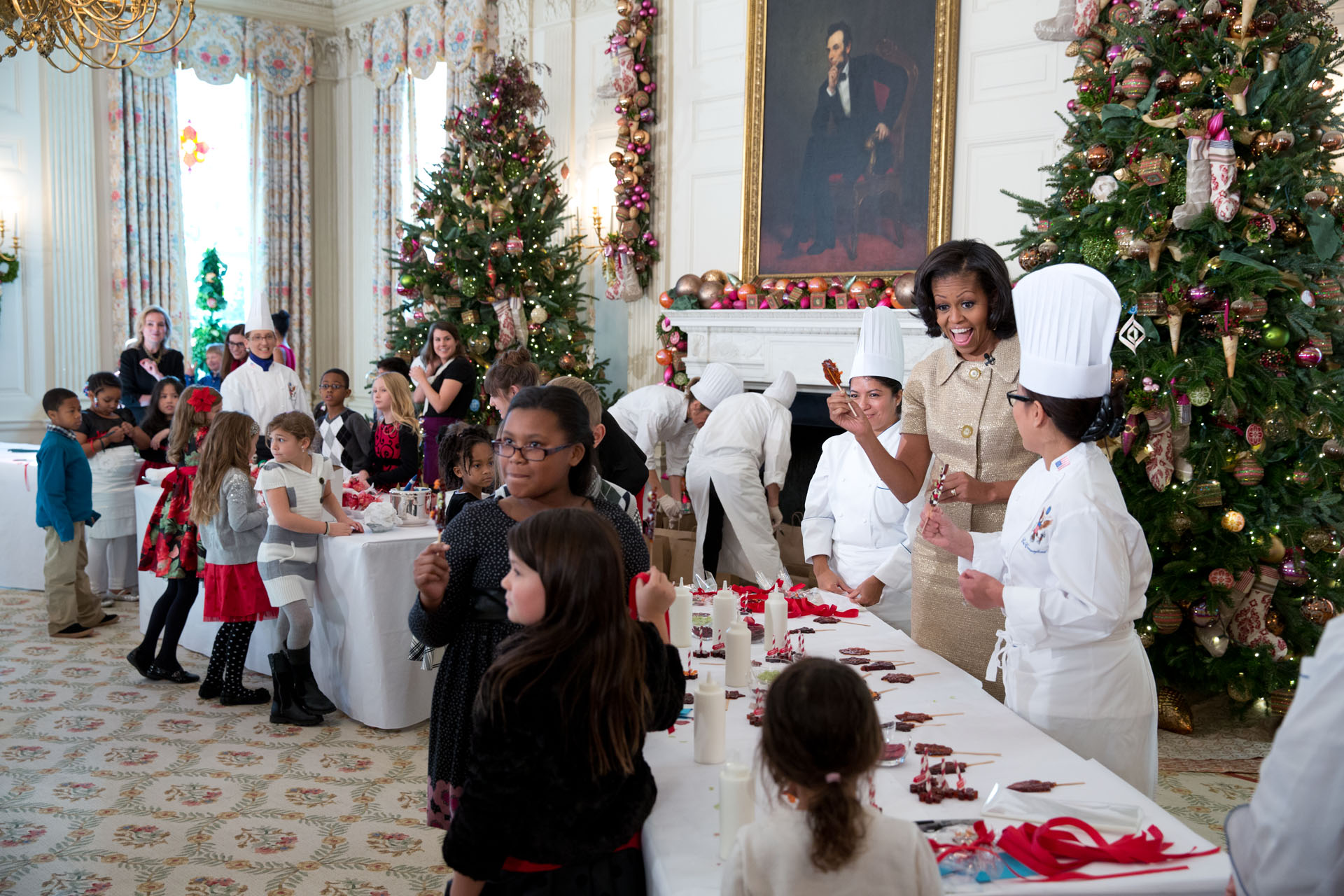 First Lady Michelle Obama shows the honey tea stirrer that she made with children of military families during a craft project in the State Dining Room of the White House during the holiday press preview, Nov. 28, 2012. (Official White House Photo by Chuck Kennedy)

Of course, none of this would be possible if not for the volunteers who take time out of their busy lives to come from all parts of the country to help decorate the White House, and Mrs. Obama thanked them in her remarks this afternoon. This year, 85 volunteers representing 39 states worked tirelessly to transform the People’s House, undertaking tasks from stringing all 20,000 of the pompoms on the Bo topiary to covering iron arches in the Lower Cross Hall with over 6,000 repurposed White House glass ornaments.