November 28, 2012 at 2:49 PM ET by Matt Compton
Twitter Facebook Email
Summary:
President Obama calls on the American people to speak up and add their voices to the debate about middle class tax cuts. 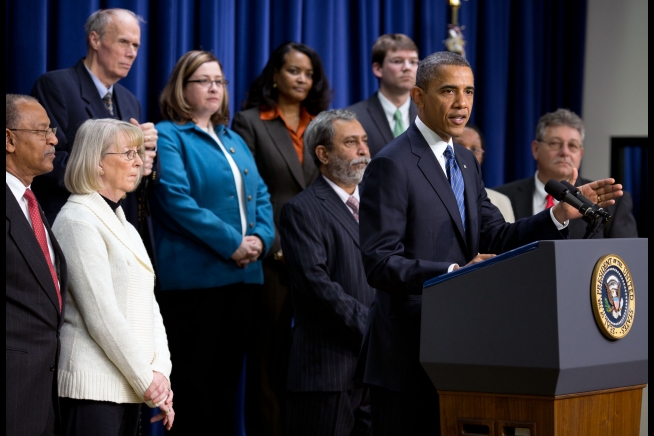 Surrounded by Americans who had written into the White House in support of his plan, President Obama today renewed his call to prevent a tax increase on the middle class.

"If Congress does nothing, every family in America will see their taxes automatically go up at the beginning of next year," the President said. "A typical middle-class family of four would see its income taxes go up by $2,200. That's $2,200 out of people's pockets. That means less money for buying groceries, less money for filling prescriptions, less money for buying diapers. It means a tougher choice between paying the rent and paying tuition. And middle-class families just can’t afford that right now."

To help find an agreement President Obama pledged to keep up the pressure -- meeting with lawmakers, labor leaders, and business executives. And he called on the American people to speak up and add their own voices to the debate.

"If there's one thing I've learned, when the American people speak loudly enough, lo and behold, Congress listens," he said.

You can share your story by visiting WH.gov/My2K, or help keep the conversation going online on Facebook and Twitter using the hashtag #My2K. Or, read what others are saying about what $2,000 means to them.

"I can only do it with the help of the American people," President Obama said. "Do what it takes to communicate a sense of urgency. We don't have a lot of time here. We've got a few weeks to get this thing done."