November 28, 2012 at 12:38 PM ET by Josh Earnest
Twitter Facebook Email
Summary:
President Obama met yesterday with small business owners from across the country to discuss the importance of preventing a tax increase on small businesses before the end of the year. 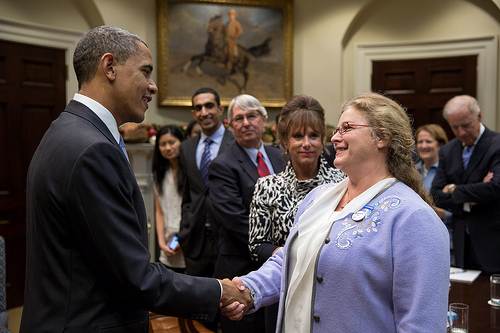 President Barack Obama talks with participants before a meeting with small business owners to discuss a balanced approach to the debt limit and deficit reduction, in the Roosevelt Room of the White House, Nov. 27, 2012. (Official White House Photo by Pete Souza)

As we move into the holiday shopping season, the President met yesterday with small business owners from across the country at the White House to discuss the importance of preventing a tax increase on small businesses before the end of the year. Given that consumer spending is roughly 70% of our economy, the President also heard directly from these local business leaders on how they would be affected by a tax increase on middle class families.

News of their visit and the important messages that these small business owners brought to the table on Tuesday was carried in their home towns from St. Louis to Jacksonville, across television, newspapers and radio.   Let’s take a look at some of the coverage of their meeting from local media outlets across the country:

Detroit – NBC (MI):  Andra Rush, Founder, Rush Trucking: “The president agrees with having tax cuts extended to 98% of the population and has already agreed to that, he’s cut $1.1 trillion in government spending already, and he's ready and willing to get the job done, as well as cut the red tape to help continue to create jobs and support small business. I think by having our economy sound and by having a budget that has been approved by all parties, bipartisan, what it does is it creates a certainty so consumers purchase. I'm in the auto industry, so people buying cars made in America is fantastic and that helps us create jobs right in the city of Detroit.” Read more here.

St. Louis – KMOX-AM (MO): “Yesterday, Vintage Vinyl managing partner Lew Prince was in Washington DC talking fiscal cliff issues with President Obama.  Prince tells KMOX he joined other small business owners from around the country urging the President to allow the Bush era tax cuts on the wealthy to expire and protect the safety net and the middle-class tax cuts. ‘What drives hiring in my business and every other business is increased demand.  And anyone who owns a business knows that when demand goes up because customers have more money, you get to hire more people. It’s really that simple.’” Read more here.

Jacksonville – WJXT (FL): “Before hitting the road, the president spent some time talking to small business leaders about the fiscal cliff. The president met with 15 people from across the country including one local man. We talked with Andy Harold, owner of A. Harold + Associates about the meeting… Harold says knowing the president is committed to figuring out a plan that will keep the economy growing, will help him as he makes decisions that could help expand his business. Harold's company provides technology, education and training support services to federal, state and local governments.” Read more here.

Small businesses are the backbone of our economy, which is why President Obama has a plan to help them grow and create jobs. From the mom-and-pop storefront shops to the high-tech startups that keep America on the cutting edge, small businesses create two out of every three new private-sector jobs in America. That helps spur economic development in communities across our country and gives millions of families and individuals the opportunity to achieve the American dream.

The President’s second term plan invests in innovation and jumpstarts small business job growth by cutting taxes for businesses who hire more workers and pay higher wages.  And his plan targets Main Street small businesses, not wealthy law partners or hedge fund managers. But before the end of the year we face a set of deadlines and Congress needs to act.  The President is working to find common ground to keep taxes keep taxes low for 97 percent of small businesses and 98 percent of American families.  By extending middle class tax cuts, every American will get a tax break on their first $250,000 of income. But if Congress fails to act, middle class families will see their income taxes go up by $2,200 in just a few short weeks.

Everyone agrees that taxes shouldn’t go up on middle class families.  The Senate sent a bill to the House to extend middle class tax cuts. There’s no reason to wait.  The President plans to build on the 18 small business tax breaks he already signed into law during his second term, but first we need to find common ground and compromise to keep taxes from going up on 97% of small businesses on January 1, 2012.

The link to a new White House report released this week from the National Economic Council and the Council of Economic Advisers providing new analysis on the impact to retailers and consumer spending if Congress fails to act can be found here.

Josh Earnest is Special Assistant to the President and Principal Deputy Press Secretary.