December 4, 2012 at 6:05 PM ET by
Twitter Facebook Email
Summary:
On Monday in Washington, DC, OSTP Director John Holdren spoke to an audience of scientists and innovators, including the student finalists of the Siemens Foundation Competition in Math, Science, and Technology. He made the case that a solid STEM education is one of the most powerful routes to a career that is both successful and meaningful to society. 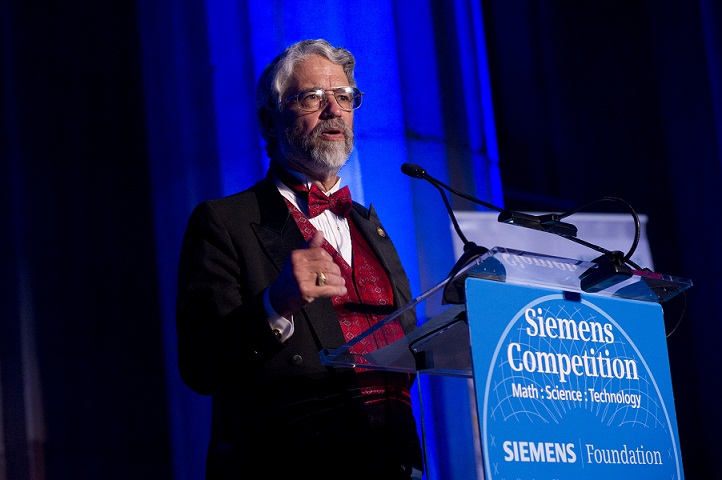 On Monday in Washington, DC, OSTP Director John Holdren spoke to an audience of scientists and innovators, including the student finalists of the Siemens Foundation Competition in Math, Science, and Technology. In his remarks, Dr. Holdren, who at the event accepted the Siemens Founder’s Award on behalf of the Administration for its work to promote student engagement in science, technology, engineering, and math (STEM), made the case that a solid STEM education is one of the most powerful routes to a career that is both successful and meaningful to society.

In citing a number of reasons why STEM education is a top priority for President Obama and this Administration, Dr. Holdren noted that science, technology and innovation are absolutely essential to achieving every one of our Nation’s goals—from growing the economy and creating jobs; to creating an environment in which Americans can live longer, healthier lives; to protecting the Nation and ensuring its security.

He described the potential of STEM advances to solve the Nation’s and the world’s Grand Challenges—those ambitious, out-of-the-box goals (like sending an astronaut to the moon and back, or sequencing the human genome) that not only inspire people but, if achieved, can revolutionize the possibilities of science. A recent example is the Department of Energy’s “Sun Shot” goal to make solar energy as cheap as coal by the end of this decade. Students who combine their innate ingenuity with the tools and skills provided by a STEM education will be in some of the best positions to achieve this and the many other important (and exciting) challenges facing the nation.  Dr. Holdren noted the power of such ambitious goals and STEM innovations generally to capture imaginations—including that of the President himself, as was never more evident than at the last White House Science Fair.

Finally, Dr. Holdren conveyed his and the President’s deep recognition that STEM-educated students are absolutely essential to helping the Nation remain one of the most competitive, creative, innovative places on Earth—noting a fitting factoid that the most common educational background of CEO’s in the S&P 500 companies is not business or finance, but engineering.

That’s why Administration activities like the Educate to Innovate campaign and collaborative efforts with leading companies, foundations, non-profits, and academia like 100Kin10 are encouraging broader participation of students in STEM and preparing more essential STEM teachers to educate them.

To all student finalists of this year’s Siemens Foundation competition and to STEM students across the country: OSTP congratulates you.

Becky Fried is a Communications & Policy Analyst at OSTP