Decorating the White House for the Holidays

December 5, 2012 at 11:28 AM ET by Michelle Vaughn
Twitter Facebook Email
Summary:
One of the 85 volunteers who donated her time to help get the White House ready for the holiday season shares her story.

Editor's note: This was originally published on BlueStarFam.org. 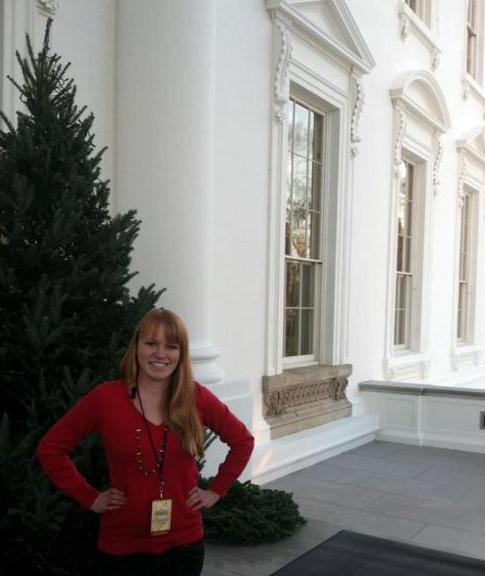 Michelle Vaughn is a Blue Star Family volunteer who decorated the White House for the 2012 holidays.

When I received an invitation to decorate the White House for the Holidays, I was in shock, literally. Normally, when something of this nature occurs, I lose it - I jump up and down, clap my hands, I start yelling or crying, and tell EVERYONE. This time, I managed to contain myself…a bit. Instead, I ran out of my quiet office, iPhone in hand, dialed my sister, and began yelling "oh my gosh, oh my gosh, I am so excited" - I think the bystanders probably thought I won the lottery. But hey, in my mind, I had won the lottery. I was given the chance to represent Blue Star Families and decorate the White House for the Holidays!

Earlier that week, I told my sister I wanted a Christmas tree to decorate…that came true, I just never imagined it would be an 18 foot-tall Christmas tree! But I couldn't have been happier when I was assigned to the team in charge of decorating the Blue Room, which meant decorating the official White House Christmas Tree. I spent two days making gold and blue star ornaments and two days decorating the Joining Forces tree. The entire room is dedicated to our armed forces and I am thrilled that BSF got the opportunity to take part in creating this special room. It was a lot of work, but the end result was incredible.

Even though Monday was back to reality and back to work, I managed to squeeze in a bit more White House time. During my lunch break, I went to put the finishing touches on the tree - and of course, I wanted one last delicious White House meal and another moment with my new favorite dog, Bo! I will say though, I was a bit envious of the other decorators when I left; they still had one more day of decorating, plus an event with the First Lady that I was missing due to my AmeriCorps training in Boston. Surprisingly though, I am actually thrilled things happened the way it did because the most rewarding part of the entire experience actually came from me not attending the First Lady reception…here’s. why.

Even though I was unable to attend the reception, I was allowed to extend the invitation to a guest - and I had the perfect person in mind. A couple of months ago, I met a Blue Star Families volunteer who dreamed of meeting the First Lady before her husband relocated to another base. She is a deserving military spouse who simply wanted to thank Mrs. Obama for her dedication to military families and to share with her the inspirational story of her grandpa in the Air Force … and that she did! With tears rolling down her face, she told Mrs. Obama her story - making it the highlight of my week.

Decorating the White House is an experience unlike any other. It truly is a once in a lifetime experience and I am thankful to have had the opportunity to represent Blue Star Families and to decorate the White House for the Holiday season.