Historic Savings in Contracting – and Plans for More

December 6, 2012 at 12:20 PM ET by Joe Jordan
Twitter Facebook Email
Summary:
The Office of Federal Procurement Policy announces that the Administration reduced contract spending by over $20 billion in Fiscal Year (FY) 2012 compared to last year, marking the largest single year dollar decrease in Federal contract spending on record. The Administration is also announcing plans to achieve more savings moving forward with efforts to pool the government’s buying power to deliver a better value for the American people through strategic sourcing.

Since the beginning of the Administration, President Obama has challenged Federal agencies to strengthen their acquisition and contracting practices by eliminating inefficiencies and buying smarter. In response, agencies have cut unnecessary contracts and launched new efforts to pool the government’s buying power to deliver a better value for the American people.

These efforts are paying off. The Administration reduced contract spending by over $20 billion in Fiscal Year (FY) 2012 compared to last year. This reduction is the largest single year dollar decrease in Federal contract spending on record, and establishes a three-year downward trend from 2009-2012. As a result, FY 2012’s total spending on contracts was $35 billion less than the amount spent in FY 2009. This decline represents a dramatic reversal of the unsustainable 12 percent contract spending growth rate experienced from 2000 through 2008. 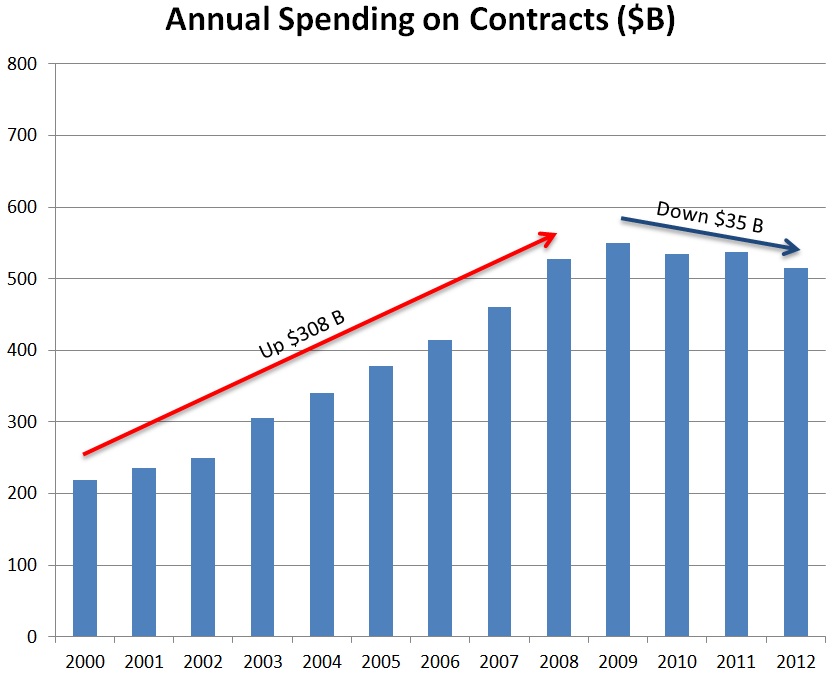 At the President’s direction, one way agencies saved money this year was by tackling overspending on management support services, which includes services such as information technology systems development, program management, and engineering. This is an area of contract spending that was plagued with inefficiency and where costs quadrupled during the previous Administration. We are pleased to announce that agencies successfully reduced management support services spending by $7 billion over the last two years, meeting the Administration’s goal of bringing down such spending by 15 percent by the end of FY 2012.

Another key way agencies have saved money in contracting is by coordinating the government’s buying, a practice known as strategic sourcing. Rather than making purchases independently, like dozens of separate medium-sized businesses, agencies have been moving to pool their purchases, both at the government-wide and agency level, to get the same goods and services at lower prices.

Government-wide strategic sourcing of items such as office supplies and domestic shipping services has already saved nearly $200 million since FY 2010. And agency-level strategic sourcing of goods like IT and medical equipment have saved hundreds of millions more. In just one example, the Department of Homeland Security saved over $386 million last year by pooling purchases for a wide range of products - everything from canines to surveillance equipment - across FEMA, the Coast Guard, Customs and Border Protection, and other components.

This progress is remarkable, and we are pleased that we have not only stemmed but reversed the unsustainable growth in contracting under the previous Administration. But there is more to do, and that is why the Administration issued guidance today to agencies to drive even better coordination of contracting to ensure that we can take strategic sourcing in the government to the next level. The guidance calls on the largest buying agencies to identify and develop at least 15 new government-wide strategic sourcing solutions that their agencies will commit to using over the next two years. The agencies will be analyzing savings opportunities across the government, in areas such as desktops and laptops, IT software, janitorial and sanitation supplies, office furniture, building maintenance and operations services, and other professional and technical services.

Maximizing the use of small businesses in Federal contracting remains a top priority of this Administration. To that end, the Small Business Administration will work alongside these large agencies to ensure that, to the fullest extent possible, all strategic sourcing opportunities increase participation by small businesses.

The initiative announced today builds on the successes that agencies have already had in this area, and will serve as the foundation for driving agencies to set new and bold goals for saving money and improving the acquisition and management of goods and services. The President will ensure that agencies move quickly to adopt new strategic sourcing solutions, increase their use of existing vehicles, and achieve even more savings for the American people over the next four years.