December 10, 2012 at 12:00 PM ET by Evan Ryan
Twitter Facebook Email
Summary:
Seven middle-class Americans with a personal stake in Washington’s “fiscal cliff” debate sit down with the Vice President at the Metro 29 Diner in Arlington, Virginia to explain how paying about $2,000 more in taxes next year would affect them.

On Friday afternoon, seven middle-class Americans with a personal stake in Washington’s “fiscal cliff” debate sat down with the Vice President at the Metro 29 Diner in Arlington, Virginia. Should Congress fail to extend tax cuts for middle-class families by the end of this year, a typical American household’s taxes would go up by over $2,000. Friday’s lunch gave several concerned Americans the chance explain how this would impact them.

Though they hailed from seven different cities and brought distinct stories to the table, the Vice President’s dining companions shared an understanding that $2,000 is too much to lose. Fernando Garabito, a naturalized citizen from Colombia, has a wife who recently lost her job and two sons in school. With $200 less per month, Garabito would have a hard time paying his bills and providing for his family’s basic needs. 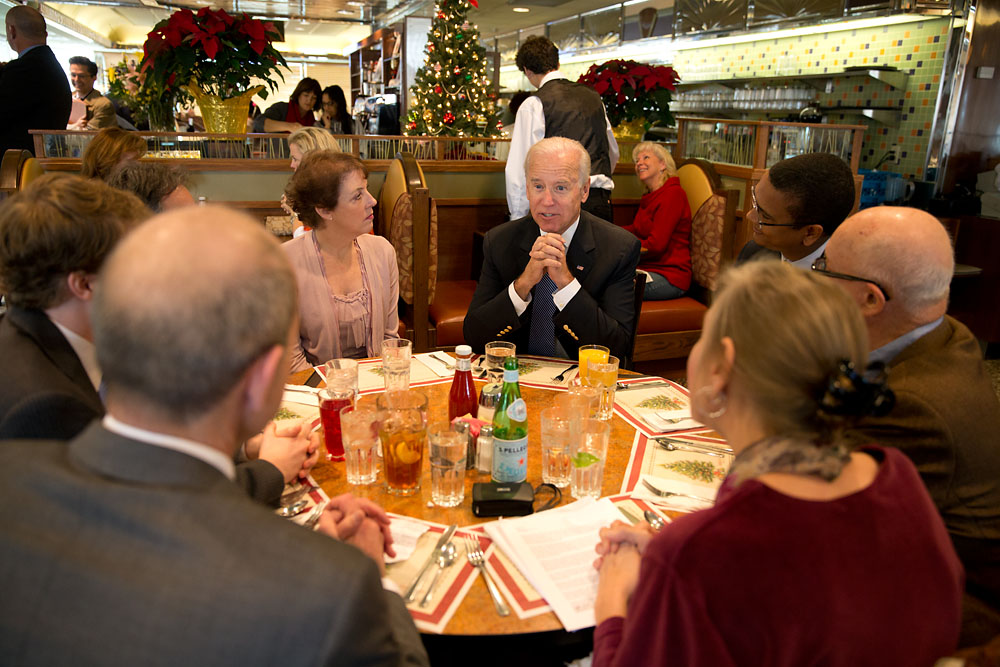 Bob Hage, a small business owner from Pennington, New Jersey, is the father of three children, two of whom have severe developmental disabilities. A $2,000 increase in taxes would force him and his wife, Odette, to choose between making ends meet and financing their children’s crucial speech therapy sessions.

Kyle Miskell, a senior at George Washington University, currently works two jobs and aspires to join the public sector after college. A tax hike on Kyle and his parents could threaten his hard-earned dreams.

98 percent of Americans would be impacted if Congress fails to extend the middle-class tax cuts. As the Vice President said, "The downside of going down this cliff...is real. This is no time to add any additional burden for middle-class people."

The countless stories of Americans whose families would suffer if their taxes go up serve as a reminder that the “fiscal cliff” has real impacts that extend far beyond Washington.