The Year in Review: Joining Forces to Hire American Heroes

December 30, 2012 at 11:44 AM ET by Colleen Curtis
Twitter Facebook Email
Summary:
In 2012, working with Joining Forces, American businesses exceeded the President's challenge to hire 100,000 veterans and military spouses and made a greater commitment for the future. 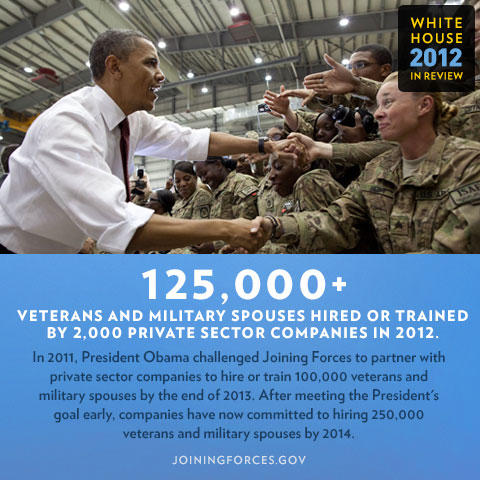 In August of 2011, President Obama challenged the private sector to hire or train 100,000 veterans and military spouses by the end of 2013. In August of this year, First Lady Michelle Obama visited Mayport Naval Station in Florida to announce that 2,000 American companies had stepped up to the challenge, and had already exceeded that goal, hiring 125,000 veterans and military spouses more than a year ahead of schedule.

In addition, those companies doubled down on their commitment to our troops and military families and made a new promise, a pledge to hire or train an additional 250,000 of our nation's heroes, including 50,000 military spouses.

The First Lady reiterated her own challenge, encouraging states to pass legislation that reduces the financial and administrative strains that 100,000 military spouses incur from trying to get their state licenses or certification credentials to transfer from state to state as they move. When Mrs. Obama and Dr. Jill Biden made their pitch to governors in February of this year, only 11 states had legislation on the books supporting military spouse license portability. In just six months the number of states with supportive measures in place more than doubled to 26 states, and the goal is that no military spouse will ever need to leave their profession behind when their family is transferred.
And as Mrs. Obama pointed out, hiring veterans is not just the right thing to do, it is a smart thing for businesses to do:

Make no mistake about it, you all have the talent, you’ve got the training and the experience to lead America’s economic comeback, and America’s businesses understand that. And that's why they’ve stepped up so readily to answer this call.  That’s why they’re hiring folks like all of you every day all across this country.