January 4, 2013 at 9:30 AM ET by Alan Krueger, Alan B. Krueger
Twitter Facebook Email
Summary:
Today’s report shows that private sector businesses added 168,000 jobs in December.The economy has now added private sector jobs for 34 straight months, and a total of 5.8 million jobs have been added over that period.

While more work remains to be done, today’s employment report provides further evidence that the U.S. economy is continuing to heal from the wounds inflicted by the worst downturn since the Great Depression. It is critical that we continue the policies that are building an economy that works for the middle class as we dig our way out of the deep hole that was caused by the severe recession that began in December 2007.

With the passage of the American Taxpayer Relief Act earlier this week, more than 98 percent of Americans and 97 percent of small businesses now have certainty that their income taxes will not rise. Additionally, unemployment insurance was extended for two million Americans who are searching for a job, and companies will continue to receive tax credits for the research that they do and continue to have tax incentives to accelerate investment in their businesses. By allowing income tax cuts for the top two percent of earners to expire, this legislation further reduces the deficit by $737 billion over the next decade. It is important that we continue to move toward a sustainable federal budget in a responsible way that balances revenue and spending while protecting critical investments in the economy and essential support for our most vulnerable citizens.

According to the establishment survey, in December employment rose notably in the health care and social assistance industry (+55,000), restaurants and bars (+38,000), construction (+30,000), and manufacturing (+25,000).  The manufacturing sector has added jobs in 30 of the last 35 months, gaining half a million jobs over that period, the most for any such period since the late-1980s.  Payrolls rose in both residential and non-residential construction jobs.  Retail trade lost 11,300 jobs, following gains totaling 161,300 over the previous four months. Government lost 13,000 jobs in December, mostly in local government education, which lost 11,500 jobs.  The local government education sector has now lost 294,400 jobs since its recent peak in November 2009.

As the Administration stresses every month, the monthly employment and unemployment figures can be volatile, and payroll employment estimates can be subject to substantial revision. Therefore, it is important not to read too much into any one monthly report and it is informative to consider each report in the context of other data that are becoming available.. 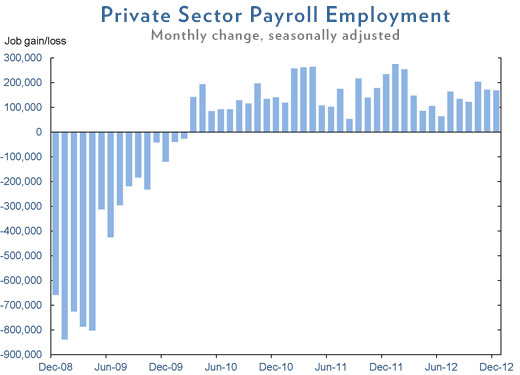