January 10, 2013 at 10:16 AM ET by Colleen Curtis
Twitter Facebook Email
Summary:
Vice President Biden is leading an effort to develop a new set of policies to prevent tragedies like the shooting in Newtown Conn. 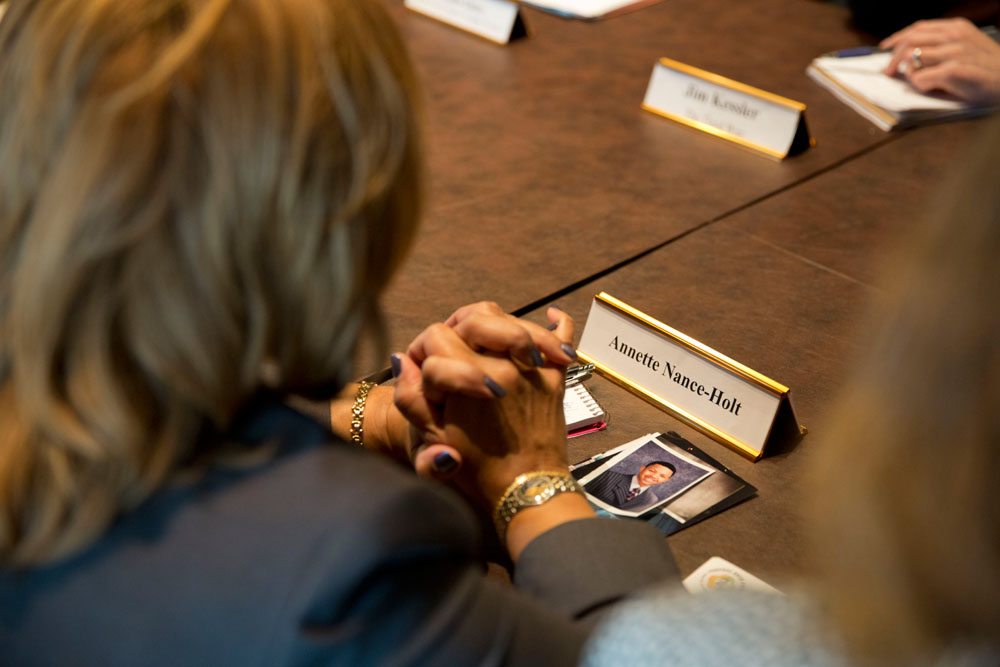 Annette Nance-Holt with a photo of her son Blair who was killed riding the bus home from school, attends a meeting chaired by Vice President Joe Biden, with gun safety advocates and victims, to develop policy proposals as part of the Administration’s response to the Newtown shootings and other tragedies, in the Cordell Hull Conference Room in the Eisenhower Executive Office Building in Washington, D.C., Jan. 9, 2013. (Official White House Photo by David Lienemann)

Right now, Vice President Biden is leading an effort to develop a new set of policies to reduce gun violence and prevent tragedies like the shooting in Newtown Conn.

Yesterday, as part of that work,  the Vice President met with victims’ groups and gun safety organizations at the White House.

Following those meetings, the Vice President held conference calls with governors of both parties, and state and local elected leaders from across the United States. The Vice President listened to the unique perspectives of all the participants, and solicited their ideas and input on how to curb gun violence in this country. During the call, Mr. Biden reiterated the Administration’s commitment to this urgent issue and stressed that the problem requires immediate action.

Today, Vice President Biden will hold meetings with advocates for sportsmen and women and gun ownership groups. He will meet with representatives of the entertainment and video game industries this week as well.

Cabinet officials and White House senior staff are joining the Vice President in this important initiative. Secretary Duncan is meeting with representatives from parent, teacher, and education groups, and Secretary Sebelius is convening mental health and disability advocates. Senior White House will continue to hold meetings with a variety of stakeholders including medical groups, community organizations, child and family advocates, business owners, faith leaders, and others.

Later this month, the Vice President will present his recommendations to the President, who will then announce a concrete package of proposals he intends to pursue without delay.