Meet the Next White House Chief of Staff

January 25, 2013 at 3:01 PM ET by Matt Compton
Twitter Facebook Email
Summary:
President Obama taps Denis McDonough to serve as his chief of staff and lead the team at the White House. 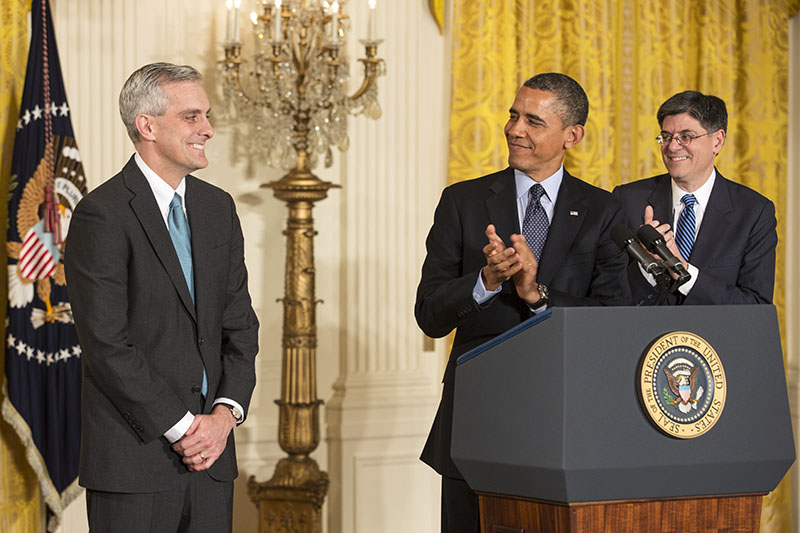 President Obama today tapped Denis McDonough to serve as his Chief of Staff and lead the team at the White House.

McDonough, 43, was previously the Deputy National Security Advisor. He began his career as a staffer on Capitol Hill -- where he served in both in the House of Representatives and in the Senate. In the White House, he previously served as the head of strategic communications for the National Security Council and as the NSS chief of staff.

"Denis has played a key role in every major national security decision of my presidency," the President said, "from ending the war in Iraq to winding down the war in Afghanistan; from our response to natural disasters around the world like Haiti and the tsunami in Japan to the repeal of 'Don't Ask, Don't Tell,' to countless crises in between, day and night -- and that includes many nights. I’ve actually begun to think that Denis likes pulling all-nighters. The truth is nobody out-works Denis McDonough."

The two were joined by the outgoing chief of staff -- Jack Lew -- who President Obama has appointed to serve as Secretary of the Treasury Department.

"As I said earlier this month, I could not be more grateful to Jack Lew for his amazing service, first as our OMB Director, then at the State Department, and ultimately as my Chief of Staff," the President said.

Read the full remarks from the event here. Or watch the video of the announcement: