President Obama Welcomes the Miami Heat to the White House

January 28, 2013 at 5:51 PM ET by Colleen Curtis
Twitter Facebook Email
Summary:
Reigning NBA MVP LeBron James and his teammates were thrilled to be at the event in the East Room 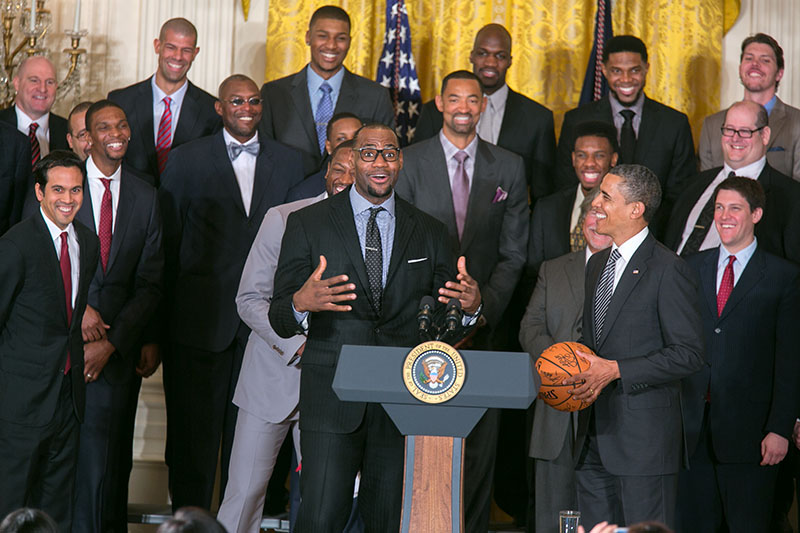 President Barack Obama accepts a basketball from LeBron James during a ceremony honoring the Miami Heat and their 2012 NBA Championship victory, in the East Room of the White House Jan. 28, 2013. (Official White House Photo by Lawrence Jackson)

As NBA world champions, the Miami Heat are used to receiving honors and acclaim, but during a reception today with President Obama, the team's standout forward -- and reigning league MVP -- LeBron James made it clear that this celebration was unlike any other. "We're in the White House right now," he said. "This is like, hey, mama, I made it."

The team was invited to commemorate their award-winning 2012 season, but in his remarks, President Obama thanked the group for spending time with some wounded warriors at Walter Reed, and paid tribute to the important role team leaders including James, Chris Bosh and captain Dwayne Wade, also play off the court:

One of the things I’m proudest of is that they take their roles as fathers seriously.  And for all the young men out there who are looking up to them all the time, for them to see somebody who cares about their kids and is there for them day in and day out, that's a good message to send.  It’s a positive message to send, and we’re very proud of them for that.

You can watch the whole event: