Advance Estimate of GDP for the Fourth Quarter of 2012

January 30, 2013 at 9:30 AM ET by Alan Krueger
Twitter Facebook Email
Summary:
According to the “advance” estimate released by the Bureau of Economic Analysis today, real GDP edged down 0.1 percent at an annual rate in the fourth quarter of 2012, amid signs that Hurricane Sandy disrupted economic activity and Federal defense spending declined precipitously.

According to the “advance” estimate released by the Bureau of Economic Analysis today, real GDP edged down 0.1 percent at an annual rate in the fourth quarter of 2012, amid signs that Hurricane Sandy disrupted economic activity and Federal defense spending declined precipitously, likely due to uncertainty stemming from the sequester.  This was the first quarterly drop in real GDP in three-and-a-half years (see first chart below). Over the last fourteen quarters, the economy has expanded by 7.5 percent overall, and the private components of GDP have grown by 10.9 percent. During the four quarters of 2012, real GDP grew by 1.5 percent, the third consecutive year of economic expansion.  Over this period, real GDP growth has been led by an expansion in the private sector (see second chart below).

Several private sector components of GDP continued to make positive contributions to growth in the fourth quarter.  Personal consumption expenditures, the single largest component of GDP, increased by 2.2 percent at an annual rate in 2012:Q4, as compared with 1.6 percent in the previous quarter. Residential investment grew by 15.3 percent last quarter and has increased for seven consecutive quarters, the longest streak since 2004-2005. Business investment in equipment and software grew at its fastest pace in more than a year, rising 12.4 percent.

Federal defense purchases declined at an annual rate of 22.2 percent in the fourth quarter of 2012, the largest quarterly decline in 40 years.  A likely explanation for the sharp decline in Federal defense spending is uncertainty concerning the automatic spending cuts that were scheduled to take effect in January, and are currently scheduled to take effect on March 1st. The decline in government spending across all levels reduced real GDP by 1.33 percentage points in the quarter.

In addition, a decline in exports of goods and services and slower inventory investment both subtracted from real GDP growth in the fourth quarter.  Both international trade flows and inventory accumulation could have been affected by disruptions caused by Hurricane Sandy, although a precise estimate of the effect of the hurricane on GDP is not available.  Nonetheless, the BEA reported that Hurricane Sandy destroyed $44 billion worth of fixed capital, which indicates one of the storm’s significant economic effects.

Although GDP is the broadest measure of economic activity, other indicators of economic performance suggest that the economy continued to recover in the fourth quarter, despite the impact of Hurricane Sandy and uncertainty surrounding fiscal issues.  For instance, at an annual rate, aggregate production-worker hours increased by 2.2 percent and industrial production rose by 1.0 percent.  Moreover, as the Administration stresses with each economic report, indicators of economic performance can be volatile and are subject to substantial revision.  The average absolute revision from the “advance” estimate of real GDP growth to the most current data is 1.3 percentage points.

Some of the fiscal issues that may have weighed on the economy in the fourth quarter of 2012 were resolved with the passage of the American Taxpayer Relief Act in early January, which provided more than 98 percent of Americans and 97 percent of small businesses with the certainty that their income taxes will not rise. Today’s report is a reminder of the importance of the need for Congress to act to avoid self-inflicted wounds to the economy.  The Administration continues to urge Congress to move toward a sustainable federal budget in a responsible way that balances revenue and spending, and replaces the sequester, while making critical investments in the economy that promote growth and job creation and protect our most vulnerable citizens. 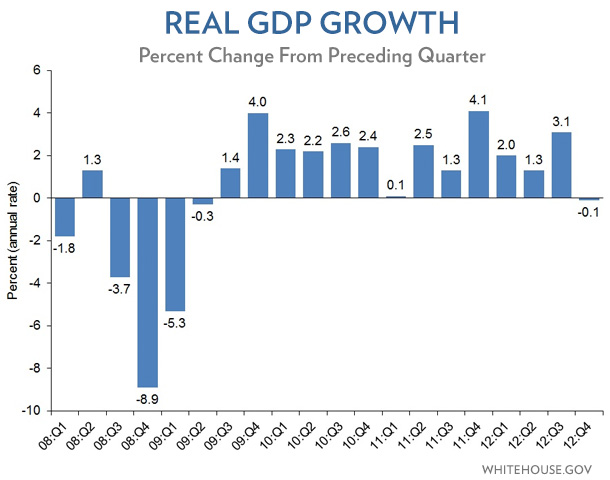 Alan B. Krueger is the Chairman of the Council of Economic Advisers.