February 1, 2013 at 9:30 AM ET by Alan Krueger, Alan B. Krueger
Twitter Facebook Email
Summary:
Today’s report from the Bureau of Labor Statistics shows that private sector businesses added 166,000 jobs in January. The economy has now added private sector jobs for 35 straight months, and a total of 6.1 million jobs have been added over that period.

While more work remains to be done, today’s employment report provides further evidence that the U.S. economy is continuing to heal from the wounds inflicted by the worst downturn since the Great Depression. It is critical that we pursue the policies needed to build an economy that works for the middle class as we continue to dig our way out of the deep hole that was caused by the severe recession that began in December 2007.

Today’s report is a reminder of the importance of the need for Congress to act to avoid self-inflicted wounds to the economy.  The Administration continues to urge Congress to move toward a sustainable Federal budget in a responsible way that balances revenue and spending, and replaces the sequester, while making critical investments in the economy that promote growth and job creation and protect our most vulnerable citizens.

With today’s release, the Bureau of Labor Statistics has finalized its benchmark adjustment, and the latest data show that the economy has now added private sector jobs for 35 straight months, and a total of 6.1 million jobs have been added over that period. In 2012, private businesses added 2.2 million payroll jobs.  The first report of private sector job growth for January is that businesses added 166,000 jobs. Total non-farm payroll employment rose by 157,000 jobs last month. The average first report of monthly job growth in 2012 was 142,000, that is now revised to 181,000 jobs per month.

According to the establishment survey, in January employment rose notably in retail trade (+32,600), construction (+28,000), health care and social assistance (+27,600), professional and business services (+25,000), and restaurants and bars (+17,100).  Manufacturing gained 4,000 jobs in January.  The manufacturing sector has added about a half-million jobs over the last three years, the most for any such period since 1996.  Also of note, in the last two years the construction sector has gained nearly 300,000 jobs, with one-third of that gain occurring in the last four months.  Government lost 9,000 jobs in January, including 5,000 Federal government jobs, and 4,700 jobs in local government education.  The local government education sector has now lost 339,400 jobs since its recent peak in November 2009. 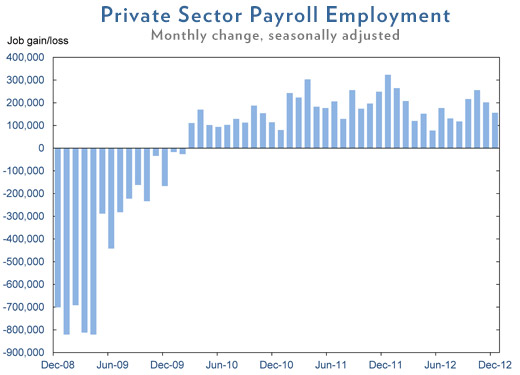