Preventing Violence: President Obama Asks Americans to Stand Up and Say "This Time It's Different"

February 4, 2013 at 5:19 PM ET by Colleen Curtis
Twitter Facebook Email
Summary:
The President was in Minnesota today, where he told a crowd that the best way to make significant progress towards reducing gun violence in this country is for the American people to decide change is important. 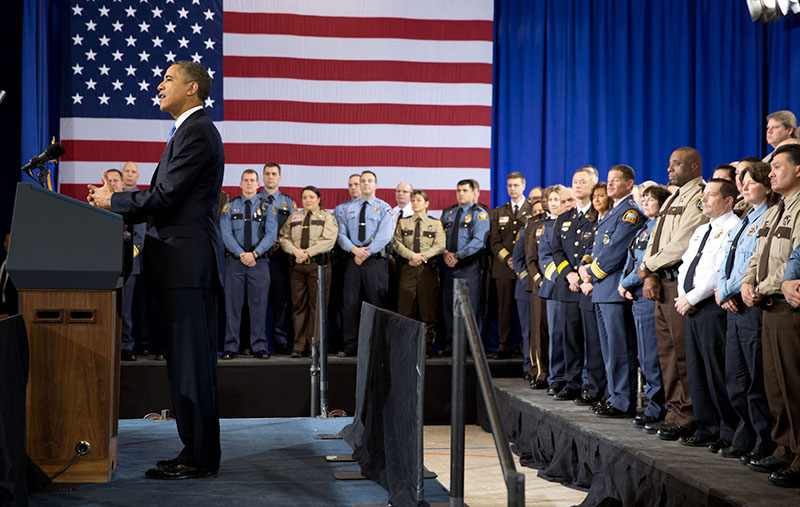 President Obama was in Minnesota today, where he met with men and women who are on the front line of the fight to prevent more tragedies like the ones in Newtown and Aurora: local police officers, community leaders, and people who themselves had been victims or whose families had been victims of gun violence.

The roundtable was part of the Obama Administration's ongoing conversations with Americans on all sides of this debate about how we can work together to keep our kids safe, help prevent mass shootings, and reduce the broader epidemic of gun violence in this country. President Obama was eager to hear from those gathered at the Minneapolis Police Department's Special Operations Center because they know firsthand the awful consequences of this epidemic, and they know what works, what doesn’t work, and how to move forward without regard for politics. Afterwards, the President described the discussion as productive:

One of the things that struck me was that even though those who were sitting around that table represented very different communities, from big cities to small towns, they all believe it’s time to take some basic, common-sense steps to reduce gun violence. We may not be able to prevent every massacre or random shooting.  No law or set of laws can keep our children completely safe. But if there’s even one thing we can do, if there's just one life we can save, we've got an obligation to try.

That’s been the philosophy here in Minneapolis. A few years back, you suffered a spike in violent crime involving young people.  So this city came together. You launched a series of youth initiatives that have reduced the number of young people injured by guns by 40 percent -- 40 percent. So when it comes to protecting our children from gun violence, you’ve shown that progress is possible. We've still got to deal with the 60 percent that remains, but that 40 percent means lives saved -- parents whose hearts aren't broken, communities that aren't terrorized and afraid.

President Obama has put forward a specific plan to protect our children and communities by reducing gun violence, which includes legislative and executive action that combined would:

These changes are a top priority for President Obama and Vice President Biden, and members of Congress from both parties are putting aside their differences and working together to make many of them a reality. But as the President pointed out today, the American people need to get involved as well:

Now, changing the status quo is never easy. This will be no exception. The only way we can reduce gun violence in this country is if the American people decide it’s important. If you decide it’s important. If parents and teachers, police officers and pastors, hunters and sportsmen, Americans of every background stand up and say this time it’s got to be different -- we’ve suffered too much pain to stand by and do nothing.