Honoring Rosa Parks on the 100th Anniversary of her Birth

February 4, 2013 at 6:04 PM ET by Valerie Jarrett
Twitter Facebook Email
Summary:
The release of a postage stamp honoring Rosa Parks on the 100th anniversary of her birthday commemorates the courage and legacy of the American civil rights icon.

Rosa Louise McCauley Parks was born on February 4, 1913. Her life inspired millions of people and challenged the conscience of our Nation. Her refusal to give up her seat on a bus on December 1, 1955, inspired a civil rights movement that led to the passage of the Civil Rights Act on July 2, 1964. “When I made that decision," she later said, “I knew that I had the strength of my ancestors with me."

We stand on the shoulders of Rosa Parks, and so many other leaders who struggled and worked to ensure our country’s founding principles of life, liberty, and the pursuit of happiness are achievable for everyone. 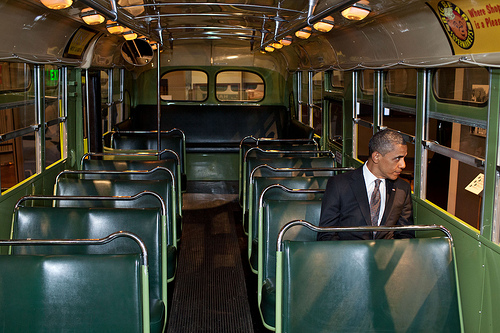 Their actions have profoundly affected not only African-Americans, but everyone who cares about equality, and the story of Rosa Parks continues to inspire many of us here at the White House, and across the Administration, as we work daily to bring more fairness and equality to our fellow citizens around our country. After all, Rosa Parks, and so many others who fought and sacrificed for equality and justice of all, paved the way for the election and re-election of the first African-American president.

On today’s anniversary, President Obama proclaims: “It has taken acts of courage from generations of fearless and hopeful Americans to make our country more just. As heirs to the progress won by those who came before us, let us pledge not only to honor their legacy, but also to take up their cause of perfecting our Union.”

The story of Rosa Parks continues to teach everyone—of all races, religions, and ages—the value of courage in the face of injustice.

Rosa Parks once said, “I would like to be known as a person who is concerned about freedom and equality and justice and prosperity for all people.” Today, with the unveiling of the Rosa Park stamp on the 100th anniversary of her birthday, we honor her wish and celebrate her memory.

As then-Senator Obama said at Rosa Parks’ funeral in 2005, “The woman we honored today held no public office, she wasn’t a wealthy woman, didn’t appear in the society pages. And yet when the history of this country is written, it is this small, quiet woman whose name will be remembered long after the names of senators and presidents have been forgotten.”

When we remember and honor Rosa Parks in our own actions every day, her legacy truly will live on forever.