Announcing the State of the Union White House Social

February 5, 2013 at 12:48 PM ET by Kasie Coccaro
Twitter Facebook Email
Summary:
Apply today for a chance to join the White House social media team for the State of the Union.

On Tuesday, February 12th, President Obama will deliver his fourth State of the Union Address from the Capitol. Over at the White House, we’ll be hosting our second State of the Union Social event. The White House Social program invites people that engage with us online to attend in-person events, and then share their experience with their own online networks in real time.

We’re excited to announce that the first White House Social of the second term will be a unique opportunity for our followers on social media to watch President Obama’s State of the Union Address live from the White House, and then participate in a panel discussion with Administration officials about the vision and policies presented during the speech.

Interested in joining? Apply for the White House social today! Registration closes at 6:00 p.m. ET on Wednesday, February 6th at http://www.wh.gov/social. After you sign up, spread the word. Let your followers know that you signed up for a #WHSocial.

If you plan on watching from home, we will be streaming an enhanced version of the speech on WhiteHouse.gov that features graphics, data and charts that help explain policies and the issues. You can also tune in live on Facebook, YouTube, Google+ and through our mobile apps. 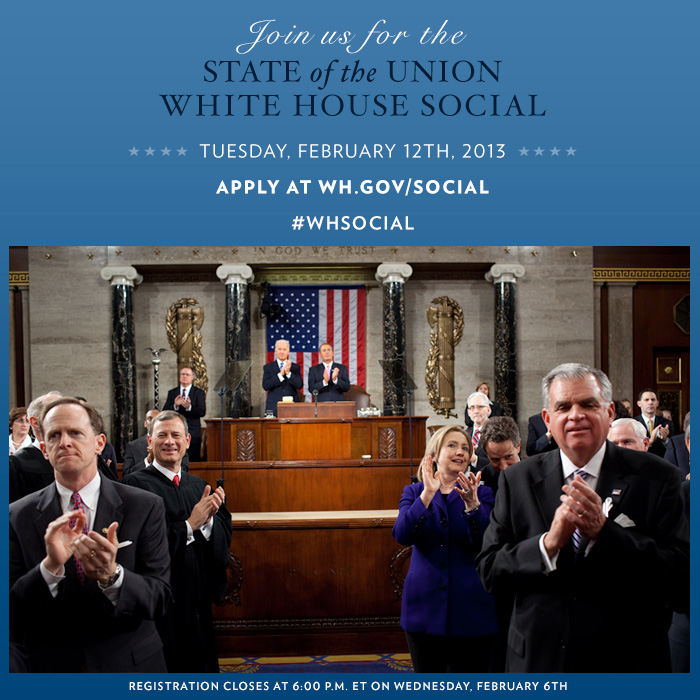