An American Hero Receives the Medal of Honor

February 11, 2013 at 10:14 PM ET by Matt Compton
Twitter Facebook Email
Summary:
Army Staff Sgt. Clinton Romesha was awarded the Medal of Honor for his actions during the Battle of Kamdesh in 2009 during the war in Afghanistan. 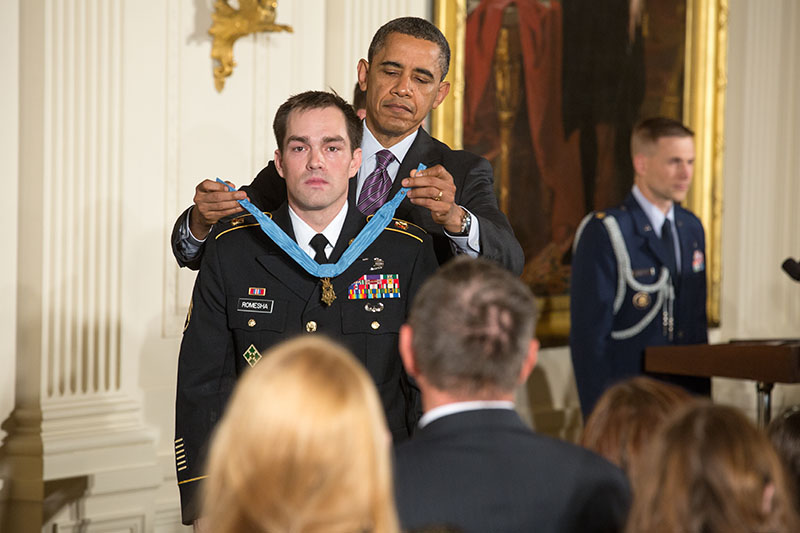 This afternoon, former Army Staff Sgt. Clinton Romesha received the Medal of Honor in a ceremony at the White House. He's the fourth living individual to do so.

On Oct. 3, 2009, Romesha was part of a unit attached to Combat Outpost Keating in the northeastern mountains of Afghanistan. In the early morning, while most of the unit was still asleep, they came under attack. Fifty-three Americans found themselves defending a position the Defense Department later called "indefensible" from more than 300 Taliban fighters.

It soon became one of the most intense battles in the war in Afghanistan.

"With gunfire impacting all around him," President Obama said, "Clint raced to one of the barracks and grabbed a machine gun. He took aim at one of the enemy machine teams and took it out. A rocket-propelled grenade exploded, sending shrapnel into his hip, his arm, and his neck. But he kept fighting, disregarding his own wounds, and tending to an injured comrade instead."

Despite those heroics, the Taliban advanced, and the American defenders withdrew to a single building. They became convinced that their position would be entirely overrun. And then, the President told the audience in the East Room, "Clint Romesha decided to retake that camp."

"Clint gathered up his guys, and they began to fight their way back," he said. "Storming one building, then another. Pushing the enemy back. Having to actually shoot up -- at the enemy in the mountains above. By now, most of the camp was on fire. Amid the flames and smoke, Clint stood in a doorway, calling in airstrikes that shook the earth all around them."

Even then, the battle wasn't over. Romesha and his team covered three of their comrades who were pinned down in a Humvee as they made their escape. Then he led a 100-meter charge, under fire, to recover the bodies of others who had died -- rather than leave them to the enemy.

When told he would receive the Medal of Honor, Romesha downplayed his actions -- and lauded the efforts of the rest of his team. And as President Obama acknowledged, there were indeed a lot of heroes in Afghanistan that day.

"If you seek a measure of that day, you need to look no further than the medals and ribbons that grace their chests," he said, "for their sustained heroism, 37 Army Commendation Medals; for their wounds, 27 Purple Hearts; for their valor, 18 Bronze Stars; for their gallantry, 9 Silver Stars."

Read the full remarks here. Or watch the video.