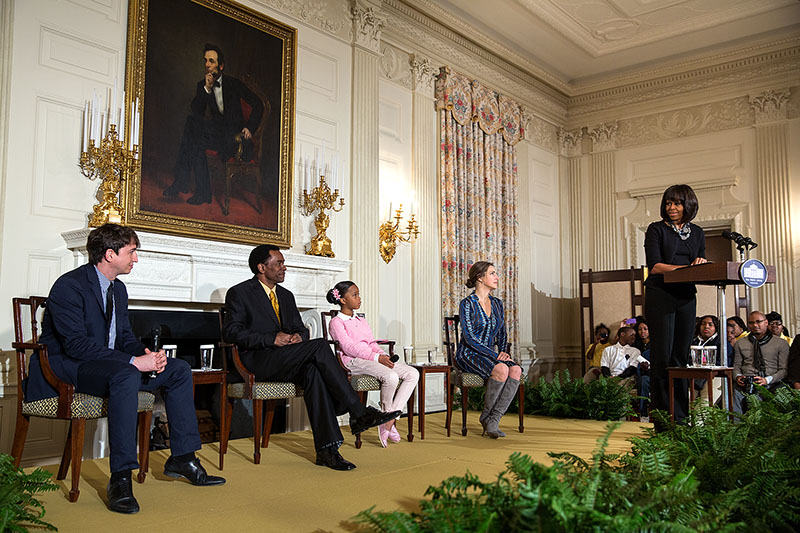 First Lady Michelle Obama today welcomed 80 middle and high school students to an interactive workshop with the cast and crew of the film Beasts of the Southern Wild, in the State Dining Room. The students, who were from Washington, DC and New Orleans, LA, got to talk with director Benh Zeitlin, actor Dwight Henry and the movie's 9-year-old star, Oscar-nominated actress Quvenzhané Wallis,  who stars as Hushpuppy.

Mrs. Obama described the film as "beautiful, joyful and devastatingly honest," and praised its underlying message of strength and resilience:

It's a movie that makes us all think deeply about the people we love in our lives who make us who we are. It shows us the strength of our communities, no matter what they look like.  It shows us that those communities can give us the power to overcome any kind of obstacles. And it also tells a compelling story of poverty and devastation, but also of hope and love in the midst of some great challenges.

So there are so many important lessons to learn in that little 93 minutes. That’s the other cool thing -- that a director and a set of writers and producers can say so much in just 93 minutes.  And it doesn’t always happen in a movie, quite frankly, but this one did it, and that’s why I love this movie so much and why our team wanted to bring it here to the White House and share it with all of you.

You can watch the whole workshop: