Giving Every Child a Chance in Life

February 16, 2013 at 10:19 AM ET by Colleen Curtis
Twitter Facebook Email
Summary:
In Chicago, President Obama laid out a plan to rebuild ladders of opportunity for every American who is willing to work hard and climb them 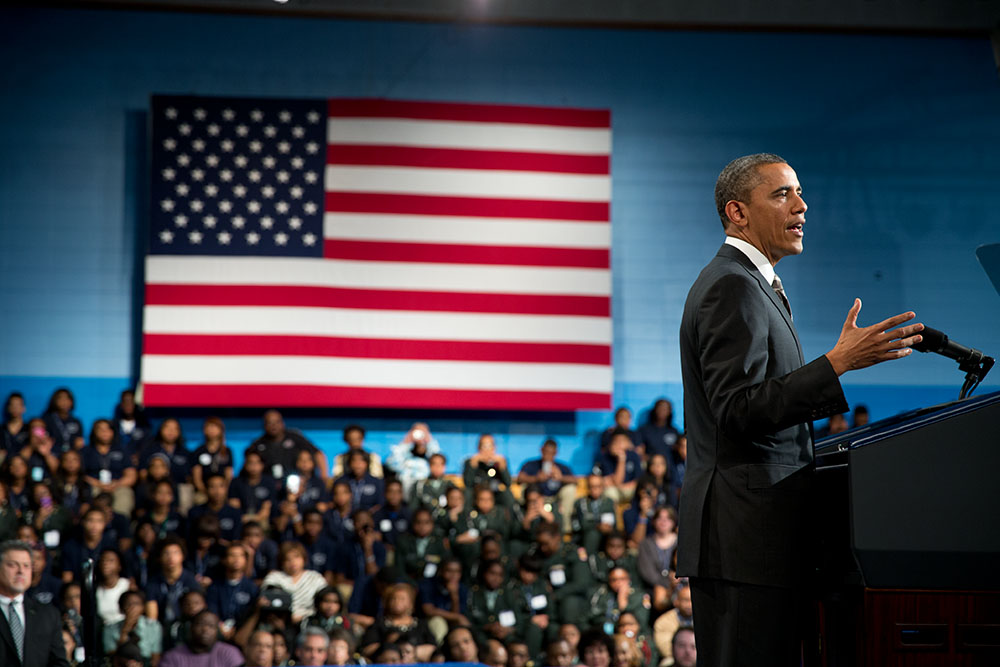 President Barack Obama delivers remarks to discuss proposals unveiled in the State of the Union Address that focus on strengthening the economy for the middle class and those striving to get there, at Hyde Park Academy, Chicago, Ill., Feb. 15, 2013. (Official White House Photo by Pete Souza)

President Obama was in Chicago on Friday to talk about the importance of making sure every child in America has every chance in life to succeed. Speaking at the Hyde Park Career Academy, which is less than a mile from the Obama's home in that city, the President discussed the recent death of Hadiyah Pendleton, a Chicago teenager who was shot just days after attending the 57th Presidential Inauguration in Washington, DC.

Hadiyah's parents were guests of First Lady Michelle Obama at the State of the Union address on Tuesday, where President Obama discussed the need to prevent this kind of senseless violence and protect American children. But the important goal of  keeping guns out of the hands of criminals is not enough to ensure a bright future for all of our children, and the President also laid out a plan to rebuild ladders of opportunity for every American who is willing to work hard and climb them. This includes making sure every child in America has access to high-quality pre-K, and raising the minimum wage so that no family that works hard and relies on a minimum wage is living in poverty. But creating a path into the middle class also means transforming high-poverty communities into places of opportunity that can attract private investment, improve education, and create jobs, and President Obama talked about his plan to make that happen:

First, we’ll work with local leaders to cut through red tape and improve things like public safety and education and housing. And we’ll bring all the resources to bear in a coordinated fashion so that we can get that tipping point where suddenly a community starts feeling like things are changing and we can come back.

Second of all, if you’re willing to play a role in a child’s education, then we’ll help you reform your schools. We want to seed more and more partnerships of the kind that Rahm is trying to set up.

Third, we’re going to help bring jobs and growth to hard-hit neighborhoods by giving tax breaks to business owners who invest and hire in those neighborhoods.

Fourth, and specific to the issue of violence -- because it’s very hard to develop economically if people don't feel safe. If they don't feel like they can walk down the street and shop at a store without getting hit over head or worse, then commerce dries up, businesses don't want to locate, families move out, you get into the wrong cycle. So we’re going to target neighborhoods struggling to deal with violent crime and help them reduce that violence in ways that have been proven to work. And I know this is a priority of your Mayor’s; it’s going to be a priority of mine.

And finally, we’re going to keep working in communities all across the country, including here in Chicago, to replace run-down public housing that doesn’t offer much hope or safety with new, healthy homes for low- and moderate-income families.

Learn more about President Obama's plan for a strong middle class and a strong America: