A Balanced Plan to Avert the Sequester and Reduce the Deficit

February 21, 2013 at 1:10 PM ET by Jennifer Palmieri
Twitter Facebook Email
Summary:
President Obama has already reduced the deficit by over $2.5 trillion, cutting spending by over $1.4 trillion, bringing domestic discretionary spending to its lowest level as a share of the economy since the Eisenhower era.

In eight days, harmful automatic cuts are slated to take effect, threatening hundreds of thousands of jobs, and cutting vital services for children, seniors, people with mental illness and our men and women in uniform.

Only Congress can avoid this self-inflicted wound to our economy and middle class families, and the only thing standing in the way of a solution today is Congressional Republicans’ refusal to even consider closing tax loopholes that benefit wealthy Americans and well-connected corporations. The President and Congressional Democrats have put forward solutions to avoid these cuts and allow time for both sides to work on a long-term, balanced solution to our deficit challenges.

The President is serious about cutting spending, reforming entitlements and the tax code to reduce the deficit in a balanced way.  The question is, will Congressional Republicans come to the table to get something done?

Let’s take a moment to look what we’ve done so far: The President has already reduced the deficit by over $2.5 trillion, cutting spending by over $1.4 trillion, bringing domestic discretionary spending to its lowest level as a share of the economy since the Eisenhower era [see below]. As a result of these savings, together with a strengthening economy, the deficit is coming down at the fastest pace of anytime in American history other than the demobilization from World War II. 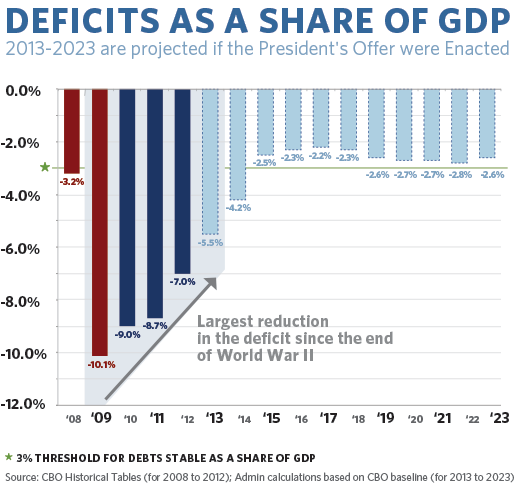 And he's laid out a specific plan to do more. His proposal resolves the sequester and reduces our deficit by over $4 trillion dollars in a balanced way- by cutting spending, finding savings in entitlement programs and asking the wealthiest to pay their fair share. As a result the deficit would be cut below its historic average and the debt would fall as a share of the economy over the next decade.  Just two months ago Speaker Boehner said there was $800 billion in deficit reduction that could be achieved by only closing loopholes and reducing tax expenditures.  So we know we can get this done. Let’s be clear: the President’s proposal to Speaker Boehner is still on the table. Here it is again.

We can't just cut our way to prosperity. Even as we look for ways to reduce deficits over the long term, we must grow the economy in a way that strengthens the middle class and everyone willing to work hard to get into it.

So the choice in front of Congressional Republicans today is simple: will they let these devastating cuts happen that will cost hundreds of thousands of jobs simply because they refuse to close one tax loophole for the wealthy? Or will they compromise and work with us on a balanced solution to get this done?  We hope they come to the table for the sake of middle class families, our national security and our future today.

Former Assistant to the President and Director of Communications