President Obama to Governors: I Look Forward to Working with You to Reignite America's Economic Engine

February 25, 2013 at 5:29 PM ET by Colleen Curtis
Twitter Facebook Email
Summary:
In meetings with the National Governors Association, the President and Vice President stressed the need for all elected officials to work together to solve our nation's biggest problems. 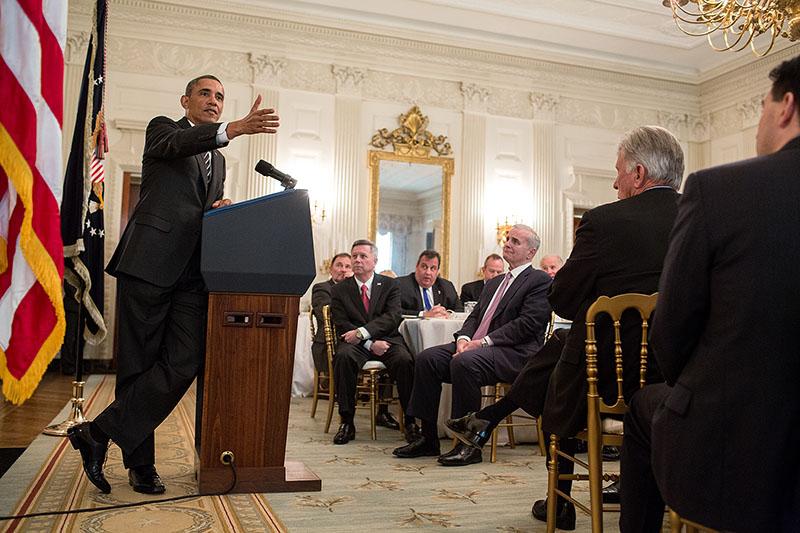 President Barack Obama delivers remarks and participates in a Q&A during a meeting with the National Governors Association (NGA) in the State Dining Room of the White House, Feb. 25, 2013 (Official White House Photo by Pete Souza)

In a meeting with the National Governors Association today at the White House, President Obama stressed the need for bipartisan cooperation, and pressed the leaders in attendance to work together with their partners in Washington to put the focus back on the next generation, rather than the next election.

All of us are elected officials. All of us are concerned about our politics, both in our own party’s as well as the other party’s. But at some point, we've got to do some governing. And certainly what we can't do is keep careening from manufactured crisis to manufactured crisis. As I said in the State of the Union, the American people have worked hard and long to dig themselves out of one crisis; they don't need us creating another one. And unfortunately, that's what we've been seeing too much out there.

The American people are out there every single day, meeting their responsibilities, giving it their all to provide for their families and their communities.  A lot of you are doing the same things in your respective states. Well, we need that same kind of attitude here in Washington. At the very least, the American people have a right to expect that from their representatives. 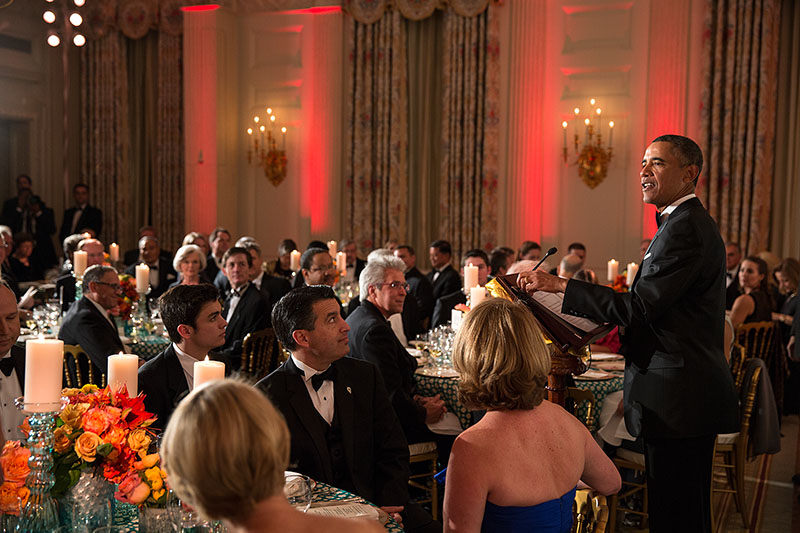 The President and First Lady hosted a dinner for the governors on Sunday at the White House, and on Monday the leaders gathered again to hear from Mrs. Obama and Dr. Biden, as well as the President and Vice President. At both events, the focus was on the progress we can and do make when elected officials work together to find smart, common-sense solutions to the challenges that face us as a nation, from recovering from national disasters like Hurricane Sandy to continuing to rebuild our economy after the 2008 crash.

Both Vice President Biden and President Obama discussed the need for Congress to take action to prevent painful automatic budget that will be felt on the ground in states across the nation beginning March 1. The President also talked about some important areas where governors are making strides that can be replicated across the country, including infrastructure and education:

I know that one of the biggest hurdles that you face when it comes to fixing infrastructure is red tape. And oftentimes, that comes out of Washington with regulations.  In my first term, we started to take some steps to address that.  And we’ve shaved months -- in some cases, even years -- off the timeline of infrastructure projects across America.

The second priority that I want to talk about is education  -- and in particular, education that starts at the earliest age. I want to partner with each of you to make high-quality preschool available to every child in America.

Now, this is an area where we've already seen great bipartisan work at the state level. I was just in Governor Deal’s state to highlight this issue because Georgia has made it a priority to educate our youngest kids. And in the school district where I visited in Decatur, Georgia, you're already seeing closing of the achievement gap. Kids who are poor are leveling up. And everybody is seeing real improvement, because it's high-quality, early childhood education.

Study after study shows that the sooner children begin to learn in these high-quality settings, the better he or she does down the road, and we all end up saving money. Unfortunately, today fewer than three in 10 four-year-olds are enrolled in a high-quality preschool program. Most middle-class parents can’t afford a few hundred bucks a week in additional income for these kinds of preschool programs. And poor kids, who need it most, lack access. And that lack of access can shadow them for the rest of their lives.  We all pay a price for that.

Every dollar we invest in early childhood education can save more than seven dollars later on -- boosting graduation rates, reducing teen pregnancy, even reducing incidents of violent crime.