President Obama Calls for a Responsible Approach to Deficit Reduction

February 26, 2013 at 3:00 PM ET by Colleen Curtis
Twitter Facebook Email
Summary:
President Obama strongly believes we need to replace the arbitrary cuts known as the sequester with balanced deficit reduction, and today he was at a shipyard in Newport News, VA to talk about what failing to do so will mean for middle class families. 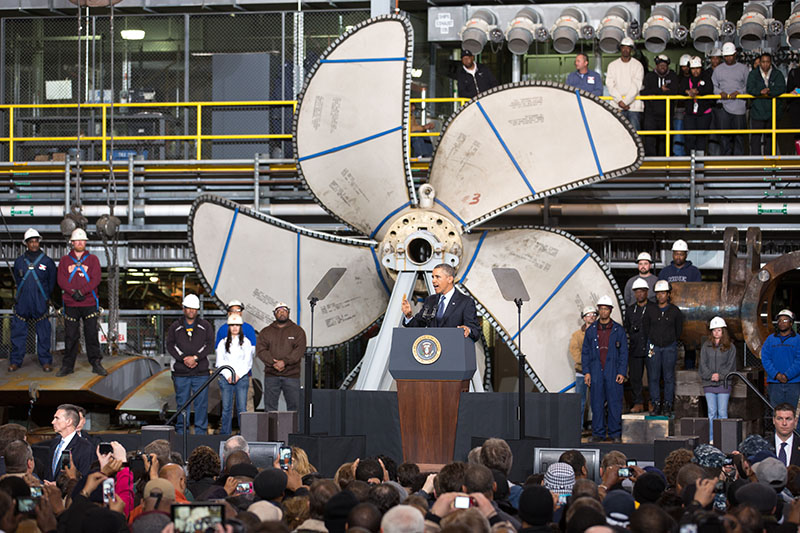 Unless Congress takes action, over the next few weeks our economy will be hit with harmful automatic cuts that threaten hundreds of thousands of middle class jobs. These cuts will slash vital services for children, seniors, people with mental illness and health care for our troops and military families.

President Obama strongly believes we need to replace these arbitrary cuts with balanced deficit reduction, and today he was at a shipyard in Newport News, VA to talk about what these cuts -- which are known as the sequester -- will mean for middle class families.

While the full damage of these cuts will spread to nearly every corner of our economy over the next few months, some workers will receive layoff or furlough notices within days. Many of the 5,000 companies and small businesses from across the country that supply Newport News Shipbuilding with parts and equipment will be impacted, which will affect the firm's productivity. And down the road at the Norfolk Naval Station, the threat of these cuts has already forced the Navy to cancel the deployment and delay the repair of certain aircraft carriers, and postpone building on additional vessels. If the cuts are implemented, about 90,000 Virginians who work for the Department of Defense will be forced to take unpaid leave from their jobs, creating a ripple effect on thousands of other jobs, businesses, and services throughout the Commonwealth – and not just in the defense industry.

Speaking to the crowd today, President Obama called the cuts a "self-inflicted wound," and he was clear that they can still be avoided:

I’ve laid out a plan that details how we can pay down our deficit in a way that’s balanced and responsible.  We have the plan right on a website, the White House website. Everybody can go see it. It details exactly how we can cut programs that don't work, how we can raise money by closing loopholes that are only serving a few, as opposed to the average American.

And what I've said is if the Republicans in Congress don’t like every detail of my proposal, which I don't expect them to, I’ve told them my door is open. I am more than willing to negotiate. I want to compromise.  There's no reason why we can't come together and find a sensible way to reduce the deficit over the long term without affecting vital services, without hurting families, without impacting outstanding facilities like this one and our national defense. There's a way of doing this.

The plan put forward by President and Congressional Democrats would avoid these cuts and allow time for both sides to work on a long-term, balanced solution to our deficit challenges. President Obama's proposal resolves the sequester and reduces our deficit by over $4 trillion dollars in a balanced way- by cutting spending, finding savings in entitlement programs and asking the wealthiest to pay their fair share. But as the President reiterated today in Virginia, America can't just cut its way to prosperity:

We've got to invest in our common future. Our true north is a growing economy that creates good middle-class jobs; a country that provides its people with the skills they need to get those jobs and make sure that you're getting paid a decent wage for working hard so you can support your families. That’s what we should be focused on right now.