Rosa Parks has a Permanent Place in the U.S. Capitol

February 27, 2013 at 3:23 PM ET by Matt Compton
Twitter Facebook Email
Summary:
President Obama is on hand for the unveiling of the new Rosa Parks statue in the U.S. Capitol 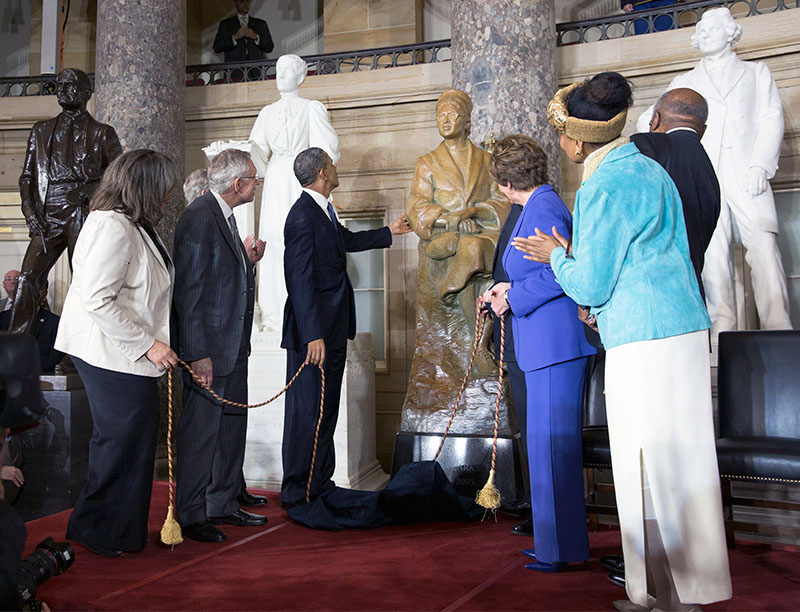 National Statuary Hall inside the U.S. Capitol was once the meeting place of the House of Representatives. Now it's home to a collection of statues and monuments -- two from each state -- representing some of the defining figures in our nation's history.

Today those sculptures were joined by that of a civil rights icon. One hundred years after she was born and 58 years after she refused to give up her seat on an Alabama city bus, Rosa Parks has a permanent place in the halls of Congress.

President Obama was one of the leaders on hand for the unveiling of the statue this morning.

"Rosa Parks held no elected office," he said. "She possessed no fortune; lived her life far from the formal seats of power. And yet today, she takes her rightful place among those who’ve shaped this nation’s course."

The statue is close to nine feet tall and depicts Rosa Parks in bronze wearing the same clothes she wore on the day she was arrested. The monument consisting of both her statue and the granite pedestal on which it rests weighs 2,100 pounds.

"Rosa Parks's singular act of disobedience launched a movement," President Obama told today's crowd. "The tired feet of those who walked the dusty roads of Montgomery helped a nation see that to which it had once been blind. It is because of these men and women that I stand here today. It is because of them that our children grow up in a land more free and more fair; a land truer to its founding creed. And that is why this statue belongs in this hall -- to remind us, no matter how humble or lofty our positions, just what it is that leadership requires; just what it is that citizenship requires."