March 8, 2013 at 9:31 AM ET by Alan Krueger
Twitter Facebook Email
Summary:
Today’s report from the Bureau of Labor Statistics (BLS) shows that private sector businesses added 246,000 jobs in February. The economy has now added private sector jobs every month for three straight years, and a total of 6.35 million jobs have been added over that period.

While more work remains to be done, today’s employment report provides evidence that the recovery that began in mid-2009 is gaining traction. Today’s report from the Bureau of Labor Statistics (BLS) shows that private sector businesses added 246,000 jobs in February. Total non-farm payroll employment rose by 236,000 jobs last month. The economy has now added private sector jobs every month for three straight years, and a total of 6.35 million jobs have been added over that period.

It is important to bear in mind that the reference period for today’s surveys was the week of February 10-16 for the household survey and the pay period containing February 12th for the establishment survey, both of which were before sequestration began.  The Administration continues to urge Congress to move toward a sustainable Federal budget in a responsible way that balances tax loophole closing, entitlement reform, and sensible spending cuts, while making critical investments in the economy that promote growth and job creation and protecting our most vulnerable citizens.

According to the establishment survey, in February employment rose notably in professional and business services (+73,000), construction (+48,000), health care (+32,000), leisure and hospitality (+24,000), and retail trade (+23,700). Manufacturing gained 14,000 jobs in February. The manufacturing sector has added over half a million jobs over the last 37 months, the most for any such period since 1986. In the last two years the construction sector has added 306,000 jobs, with half of that increase occurring in the last five months. State and local governments lost 10,000 jobs in February, mostly in education. The local government education sector has now lost 340,700 jobs since its recent peak in November 2009. 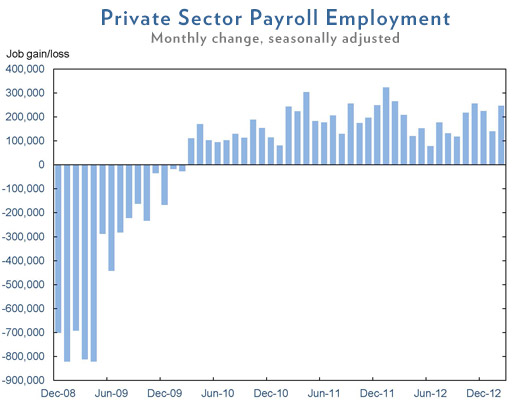