March 13, 2013 at 10:45 AM ET by Macon Phillips
Twitter Facebook Email
Summary:
As part of our Sunshine Week series, Macon Phillips discusses We the People.

Ed. Note: This post is part of our Sunshine Week series on the blog. Sunshine Week is a national initiative to celebrate and focus on government transparency and open government. Macon Phillips will also discuss We the People in a Yahoo! News Chat today at 12:30 PM ET.

We have a government of the people, by the people, and for the people, and the wisdom, energy, and creativity of the American public is the nation’s greatest asset. Sunshine Week seeks to encourage public participation in government, and the U.S. has worked hard to expand opportunities for civic engagement. As one example of this, We the People gives the Obama Administration a way to connect with the public on the issues that matter most to them.

Since its creation, 7.2 million people have logged more than 11.6 million signatures on more than 178,000 petitions on issues ranging from education to immigration to tax policy. 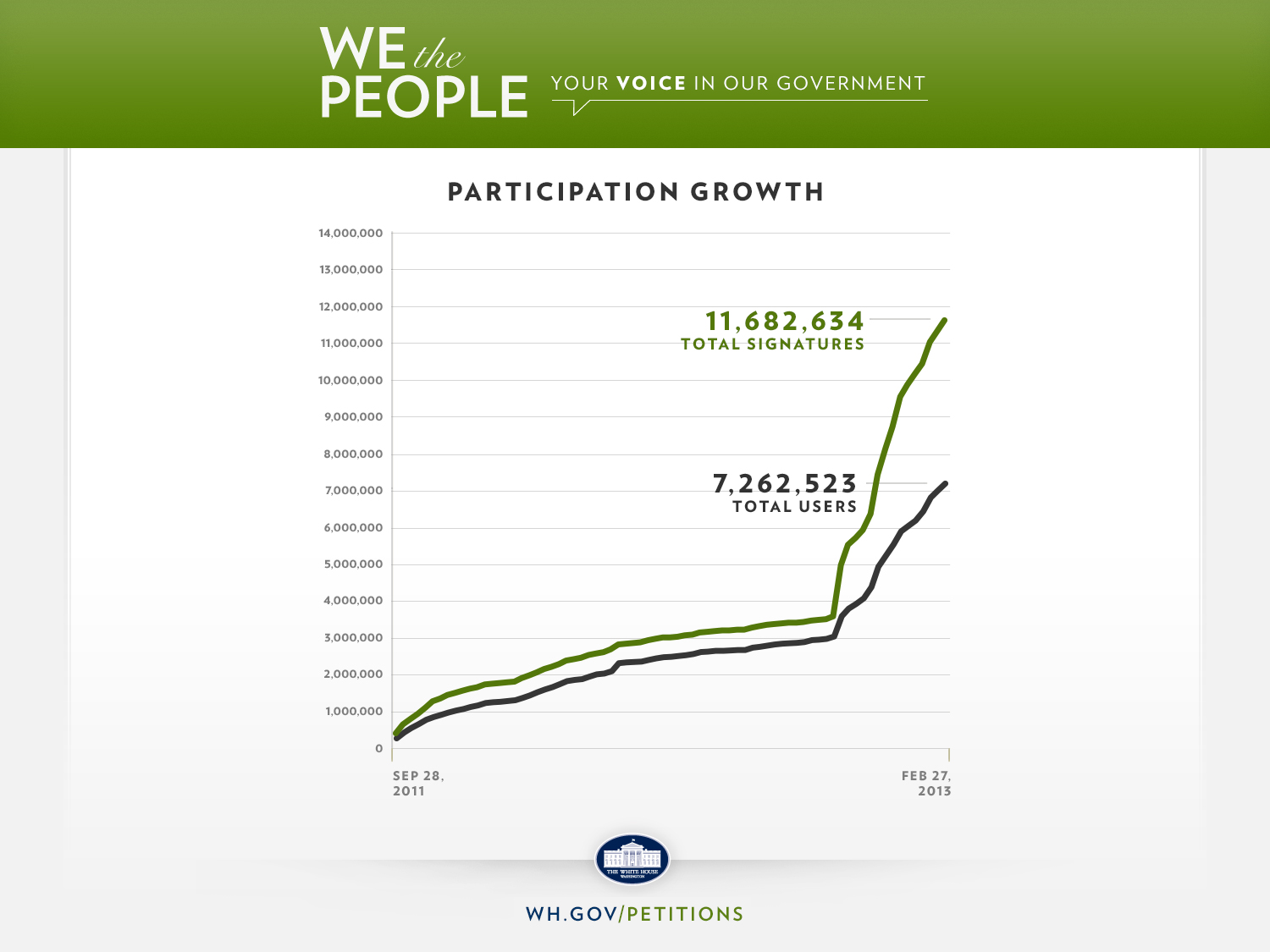 In many cases, petitions posted on We the People have helped spur discussions of important policy issues at the White House and across the Administration, and serve as a catalyst for change. We’ve also used the platform to announce new directions in policy or to continue a dialogue with people who have an interest in this issue.

To give just one example, on March 3, 2013, the White House responded to a petition that argued that individuals ought to have a right to unlock their cell phones. This was not an issue on which the White House had previously taken a policy position. But after more than 114,000 people spoke out using We the People, officials across government who work on telecommunications, technology, and copyright issues sat down, discussed the policy implications, and decided that the petitioners were exactly right: Consumers needed a strong statement of support from the White House. We are ready to work with to work with Congress, the wireless and mobile phone industries, and other Federal agencies to reach a solution—whether legislative or otherwise.

Even when we’re not able to provide a response that produces a policy change, individuals who use We the People find the process useful and constructive. Last year, we started surveying people who received a response from the Administration. Even when petitioners disagree with our response, they appreciate the opportunity to petition the White House and hear what we have to say:

What comes next? In August 2012, we announced a new step in the evolution of We the People. We made the platform open source so that any government in the world -- from sovereign nations to small towns across America -- could take our code and put it to their own use. Now, we're continuing that movement toward openness by working to develop an Application Programming Interface (API).

We'll roll out the API in two stages. First, we'll introduce a Read API that allows individuals to request data from We the People, that they can in turn use to build programs and applications. Second, we'll launch a Write API that allows individuals to collect and submit signatures from their own platforms without directly sending users to We the People.

The beautiful part about this process is that we’ll be able to open up the platform and allow others to create things with it. We just hosted our first Hackathon—where a group of engineers, programmers, data scientists, and web developers took a first stab at using the information the Read API makes available. At the end of the day, they had working prototypes of numerous projects—including an embeddable map that shows the geographic support for any single petition, a time-lapse visualization of zip codes where petitions are being signed, an embeddable thermometer that shows progress toward crossing the signature threshold for any given petition, and a range of data analysis.

In the spirit of Sunshine Week and open government, it’s all part of our effort to make the platform more responsive and useable for the American public.