March 18, 2013 at 7:12 PM ET by Colleen Curtis
Twitter Facebook Email
Summary:
The President vowed that he and his entire administration will do everything they can to ensure equality and opportunity for all women. 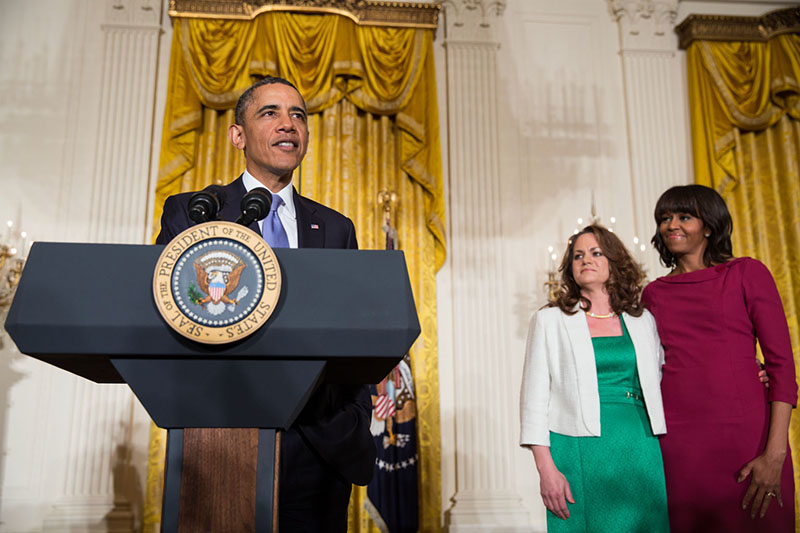 When I look around this room, it is hard to believe that 100 years ago this month, thousands of women were marching right outside this house demanding one of our most fundamental right: the right to vote, to have a say in our democracy. And today, a century later, its rooms are full of accomplished women who have overcome discrimination, shattered glass ceilings, and become outstanding role models for all of our sons and daughters. And that means we've come a long way, and that’s thanks to the efforts of so many people like you. 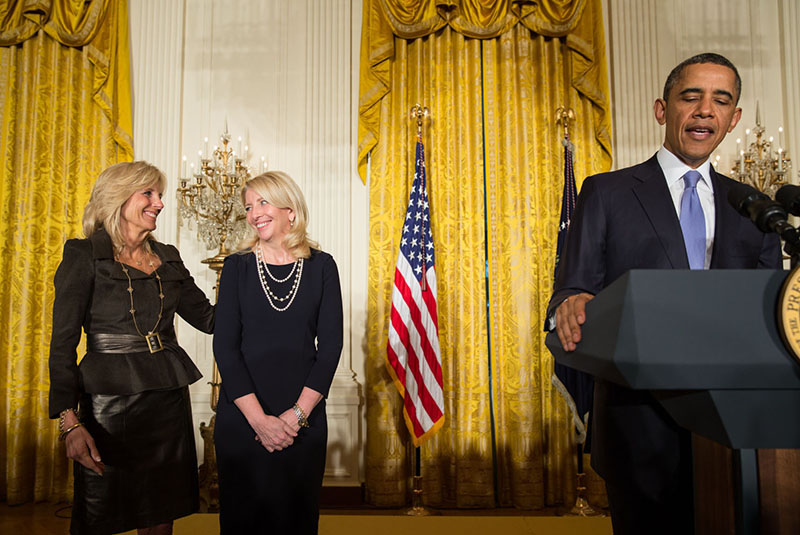 President Barack Obama and Dr. Jill Biden welcome Cathy Russell to the stage after the President announced her nomination as Ambassador at Large for Global Women’s Issues, during the Women’s History Month reception in the East Room of the White House, March 18, 2013. (Official White House Photo by Pete Souza)

President Obama used his remarks at the event to make a personnel announcement, revealing that he is nominating Cathy Russell, who has served as Dr. Jill Biden's Chief of Staff and is a longtime advocate for women, as the next Ambassador-at-Large for Global Women’s Issues:

It’s women like Cathy, like Jill, like Amanda, like Michelle, like all of you, that inspire so much progress each and every day. And I’ve got to tell you, all of you inspire me to make sure that I’m doing everything that I can as President to carry on that progress, and to do everything we can to ensure equality and opportunity for all women.

Just last week, I was proud to sign the reauthorization of the Violence Against Women Act -–  a law, by the way, that Cathy helped to make possible in the first place, securing for women the protections and the services to help them live their lives free from fear of violence and free to pursue their own measure of happiness.

And that’s what everybody deserves in this country -– the opportunity to make of their lives what they will, no matter who they are, what they look like, whether they are boys or girls, women or men. That’s why I ran for President in the first place –- to put the same rights and opportunities within the reach of all of our daughters and sons. And while there’s still a lot of work to be done, I am confident that we can reach that goal, that we can make sure that every single door is open, every dream is within reach -- for Malia, for Sasha, for your daughters, for your granddaughters -- to make sure that they never feel like there are barriers in front of them, and that if they work hard, they can make it.