Reaffirming the Incredible Bond Between the United States and Ireland 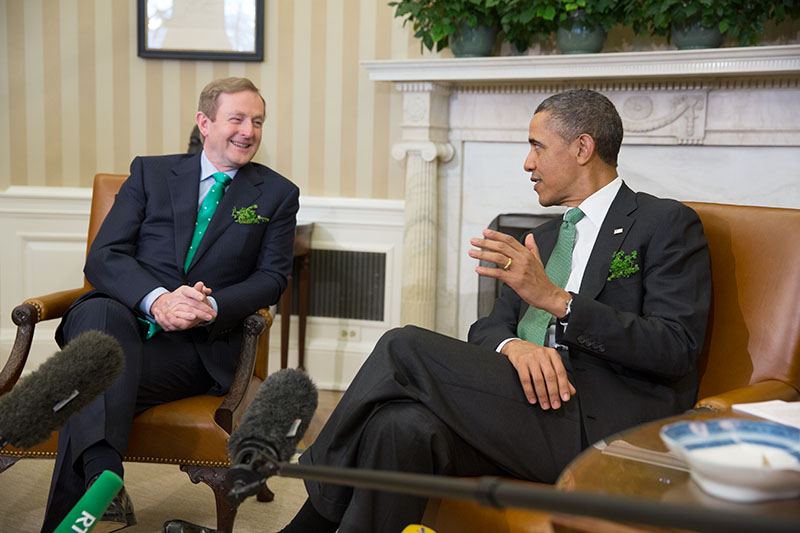 Today, President Obama held a bilateral meeting with Irish Prime Minister Enda Kenny at the White House before the two leaders traveled to the Capitol for a St. Patrick's Day Luncheon.

In their Oval Office meeting -- the fifth since President Obama took office -- the President and Taoiseach reaffirmed the incredible bond between the United States and Ireland.

"We have an incredibly strong partnership on economic issues, on security issues," President Obama said. "The Taoiseach has shown great leadership during difficult times in Ireland. And we’re seeing progress in the Irish economy."

Noting one example of this progress, President Obama mentioned a deal to sell American-made planes to Ireland that will help businesses here in the U.S create jobs.

The Taoiseach, who is currently serving as President of the European Union, took the opportunity to brief President Obama on the strategic plan in place to address challenges facing the Irish government, as well as an update on advancing EU-U.S. trade.

At the Capitol later in the afternoon, the President and Prime Minister reflected on the relationship between our two countries, both past and present. President Obama offered a toast to an "eternal friendship."

So on this St. Patty’s Day, let’s remember the Irish -- both those who have left us and those who are with us today, who have fought and bled and labored to make this country a better place for their children and for ours.  Let’s give thanks for the men and women who proved that through hard work and perseverance, anybody can earn themselves a piece of the American Dream.

And let’s welcome our Irish brethren who have welcomed so many of us -- not just as allies and as friends, but as family as well.

To cap off the St. Patrick's Day celebrations, the President and First Lady hosted a reception at the White House this evening.