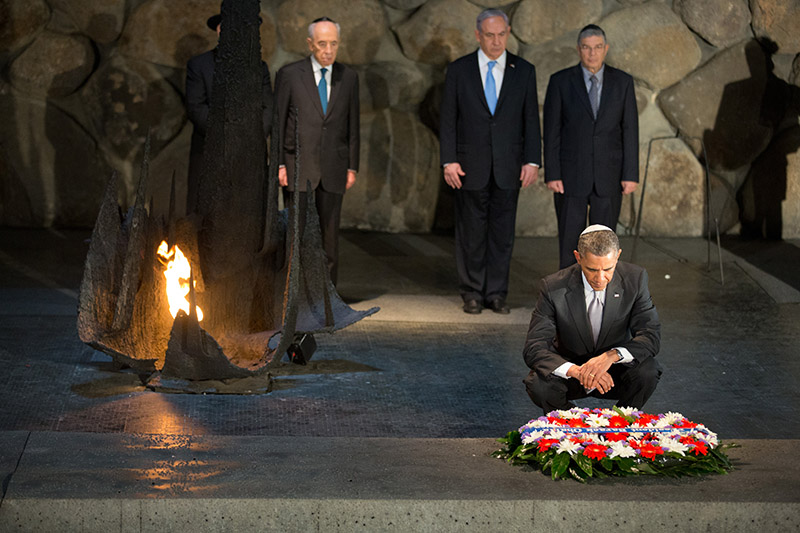 President Obama began the third day of his historic visit to the Middle East with a visit to Mount Herzl, Israel's national cemetery, where he honored the significant contributions of two Jewish heroes, Theodor Herzl, the founder of Zionism and former Israeli Prime Minister Yitzhak Rabin. The President laid a stone from the Martin Luther King Jr. memorial in Washington on Mr. Rabin’s grave, highlighting the slain leader’s work to bring peace to the region.

Next up was a tour of Yad Vashem Holocaust Memorial Complex, where President Obama honored the memory of Holocaust victims by laying a wreath and rekindling the eternal flame in the Hall of Remembrance. He also joined Israeli President Shimon Peres and Prime Minister Netanyahu on a tour that included the Hall of Names, a circular chamber that houses the original testimony documenting every Holocaust victim ever identified, and the art museum where the President heard the story of Charlotte Salomon, a Holocaust victim who was murdered in 1944 in Auschwitz, but whose memory is preserved in the autobiographical artwork she painted while in hiding from the Nazis.  The President ended the poignant visit with a walk through the Children’s Memorial, which memorializes the 1.5 million Jewish children who perished during the Holocaust with candles reflected in a series of mirrors.

For here we learn that we are never powerless. In our lives we always have choices. To succumb to our worst instincts or to summon the better angels of our nature. To be indifferent to suffering to wherever it may be, whoever it may be visited upon, or to display the empathy that is at the core of our humanity. We have the choice to acquiesce to evil or make real our solemn vow -- “never again.” We have the choice to ignore what happens to others, or to act on behalf of others and to continually examine in ourselves whatever dark places there may be that might lead to such actions or inactions. This is our obligation -- not simply to bear witness, but to act.

For us, in our time, this means confronting bigotry and hatred in all of its forms, racism, especially anti-Semitism. None of that has a place in the civilized world -- not in the classrooms of children; not in the corridors of power. And let us never forget the link between the two. For our sons and daughters are not born to hate, they are taught to hate. So let us fill their young hearts with the same understanding and compassion that we hope others have for them. 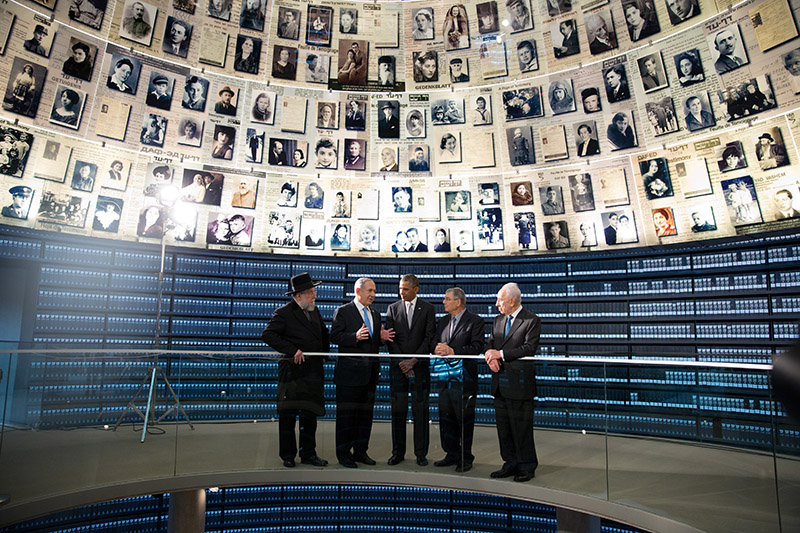 Just before departing Tel Aviv in the afternoon, President Obama joined President Netanyahu’s phone call with Prime Minister Erdogan of Turkey, in which the leaders discussed the normalization of relations between Turkey and Israel. The United States deeply values our close partnerships with both countries and welcomes this step to restore their relationship, which will benefit both countries and the larger region.

The President then headed to Jordan, the final stop on the first foreign trip of his second term. He was greeted at Al-Hummar Palace in Amman by King Abdullah II and his son, Crown Prince Hussein bin Abdullah, and participated in an official welcoming ceremony. The President and the King then held a bilateral meeting where they discussed several issues of importance to both countries, including the ongoing turmoil in Syria, and the 460,000 citizens of that country who have fled to Jordan seeking safety.

In a joint press conference that followed, King Abdullah II said the unrest in the country that borders his "will have disastrous consequences on the region for generations to come," if not resolved. He highlighted the humanitarian crisis that has resulted, with one refugee camp growing so large it is now the fifth largest city in Jordan, and thanked the U.S. for  our help in shouldering the enormous responsibility.

President Obama told reporters that he had come to Jordan to build on the very strong foundation that already exists between our two countries and to deepen the already extraordinary cooperation. He also praised the Jordanian people -- and their King -- for their compassion during an extraordinarily difficult time for their neighbors. "His Majesty was the first Arab leader to publicly call on Assad to step down because of the horrific violence that was being inflicted on the Syrian people. Jordan has played a leading role in trying to begin a political transition toward a new government. We're working together to strengthen a credible Syrian opposition."

The President also reiterated the U.S.'s commitment to the security of Jordan, which is backed by our strong alliance. 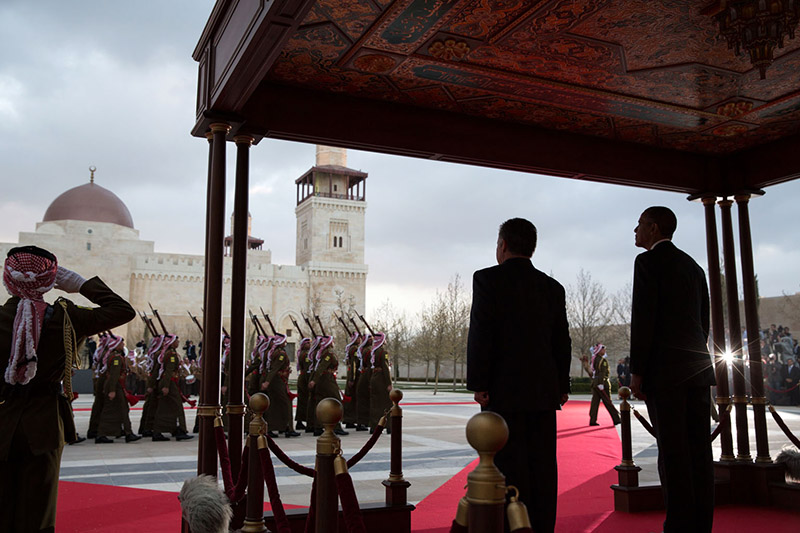 President Barack Obama and King Abdullah II stand at the dais as the honor guard is dismissed during the official arrival ceremony at Al-Hummar Palace in Amman, Jordan, March 22, 2013. (Official White House Photo by Pete Souza)