March 28, 2013 at 4:56 PM ET by Grant T. Harris
Twitter Facebook Email
Summary:
President Obama and the visiting leaders discussed how the United States can expand our partnership to support their efforts to strengthen democratic institutions and promote economic opportunity, both in their countries and across sub-Saharan Africa.

Today President Obama welcomed President Ernest Bai Koroma of Sierra Leone, President Macky Sall of Senegal, President Joyce Banda of Malawi, and Prime Minister José Maria Pereira Neves of Cape Verde to the White House.  The United States has strong partnerships with these countries based on shared democratic values and shared interests.  Each of these leaders has undertaken significant efforts to strengthen democratic institutions, protect and expand human rights and civil liberties, and increase economic opportunities for their people.

President Obama and the visiting leaders discussed how the United States can expand our partnership to support their efforts to strengthen democratic institutions and promote economic opportunity, both in their countries and across sub-Saharan Africa.  A particular focus of the conversation was on the importance of transparency and respect for human rights, and President Obama commended each leader for their work in these areas and their commitment to join the Open Government Partnership.  President Obama also commended these leaders for their leadership on food security and engaged the leaders in a fruitful conversation about how the United States can help Africa harness the potential of its young people and empower the next generation of African leaders.

While in Washington, each leader is participating in numerous meetings and events to strengthen bilateral cooperation on a range of shared priorities.  Joint events include a dinner hosted by the Corporate Council on Africa to discuss trade and investment opportunities with representatives from U.S. businesses; a public discussion on democratization in Africa at the United States Institute for Peace; an economic and development roundtable with U.S. government officials; and a meeting with Secretary of Defense Hagel to discuss cooperation on shared regional security and peacekeeping objectives in Africa.

The visit of these four leaders underscores the President’s commitment to substantive engagement and strengthened partnerships with African nations.  A link to the President’s remarks following the meeting can be found here, and you can watch a video of the leaders above or on YouTube. 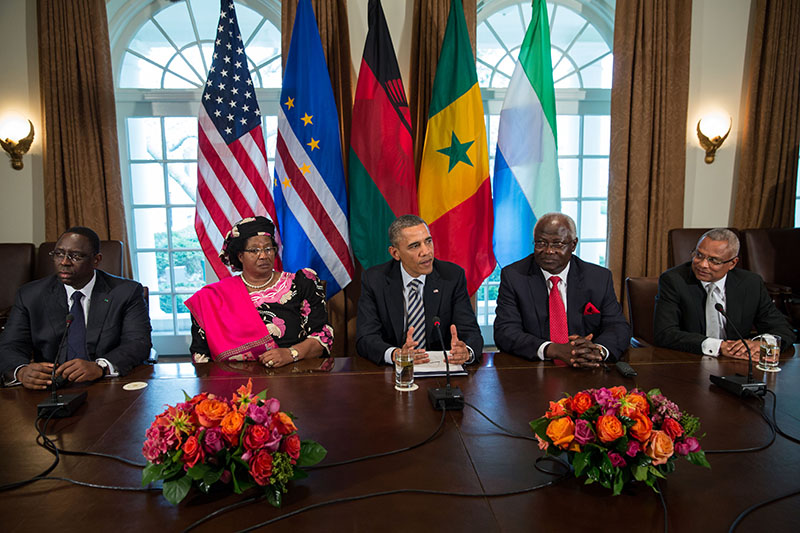 Special Assistant to the President and Senior Director for African Affairs