The BRAIN Initiative — short for Brain Research through Advancing Innovative Neurotechnologies — builds on the President’s State of the Union call for historic investments in research and development to fuel the innovation, job creation, and economic growth that together create a thriving middle class.

The Initiative promises to accelerate the invention of new technologies that will help researchers produce real-time pictures of complex neural circuits and visualize the rapid-fire interactions of cells that occur at the speed of thought. Such cutting-edge capabilities, applied to both simple and complex systems, will open new doors to understanding how brain function is linked to human behavior and learning, and the mechanisms of brain disease. 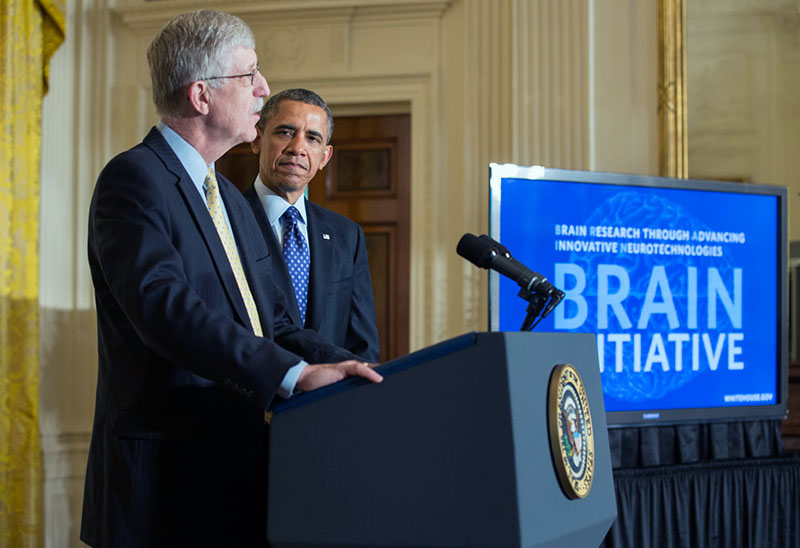 In his remarks this morning, the President highlighted the BRAIN Initiative as one of the Administration’s “Grand Challenges” – ambitious but achievable goals that require advances in science and technology to accomplish. The President called on companies, research universities, foundations, and philanthropies to join with him in identifying and pursuing additional Grand Challenges of the 21st century—challenges that can create the jobs and industries of the future while improving lives.

In addition to fueling invaluable advances that improve lives, the pursuit of Grand Challenges can create the jobs and industries of the future.

That’s what happened when the Nation took on the Grand Challenge of the Human Genome Project. As a result of that daunting but focused endeavor, the cost of sequencing a single human genome has declined from $100 million to $7,000, opening the door to personalized medicine.

Like sequencing the human genome, President Obama’s BRAIN Initiative provides an opportunity to rally innovative capacities in every corner of the Nation and leverage the diverse skills, tools, and resources from a variety of sectors to have a lasting positive impact on lives, the economy, and our national security.

That’s why we’re so excited that critical partners from within and outside government are already stepping up to the President’s BRAIN Initiative Grand Challenge.

The BRAIN Initiative is launching with approximately $100 million in funding for research supported by the National Institutes of Health (NIH), the Defense Advanced Research Projects Agency (DARPA), and the National Science Foundation (NSF) in the President’s Fiscal Year 2014 budget.

Foundations and private research institutions are also investing in the neuroscience that will advance the BRAIN Initiative.  The Allen Institute for Brain Science, for example, will spend at least $60 million annually to support projects related to this initiative.  The Kavli Foundation plans to support BRAIN Initiative-related activities with approximately $4 million dollars per year over the next ten years.  The Howard Hughes Medical Institute and the Salk Institute for Biological Studies will also dedicate research funding for projects that support the BRAIN Initiative.

This is just the beginning. We hope many more foundations, Federal agencies, philanthropists, non-profits, companies, and others will step up to the President’s call to action.

Learn more about the BRAIN Initiative here and here.

Follow new developments relating to the BRAIN Initiative and other advances in science and technology at the White House Office of Science and Technology Policy Blog and @whitehouseostp on Twitter.