April 2, 2013 at 3:00 PM ET by Colleen Curtis
Twitter Facebook Email
Summary:
The discussion focused on the inspirational themes from Jackie Robinson's life that students can apply to their own. 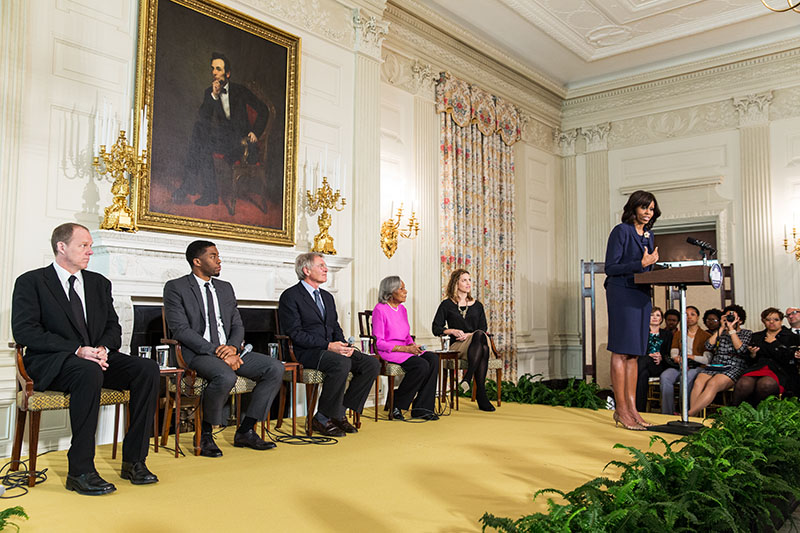 First Lady Michelle Obama today hosted 80 high school and college students from across the country for a screening of "42," followed by an interactive workshop with the cast and crew of the movie. "42" tells the story of Jackie Robinson, the very first African American to play major league baseball. The panel was moderated by Paulette Aniskoff, Director of the White House Office of Public Engagement, and featured Harrison Ford, Chadwick Boseman and Brian Helgeland.

The discussion focused on the inspirational themes from Robinson's life that students -- who came from Thurgood Marshall Academy in Washington, DC; Watkins Mill High School in Gaithersburg, MD; TC Williams High School in Alexandria, VA and Amino Jackie Robinson Charter High School in Los Angeles, CA -- can apply to their own.

Also joining the conversation was Rachel Robinson, Jackie Robinson's widow and his partner throughout his incredible life's journey. And as Mrs. Obama explained to the young crowd, Mrs. Robinson's example can be their guide. "Jackie and Rachel Robinson weren't destined for greatness -- they prepared themselves for greatness, which meant that they could make a difference outside of baseball, as well. And that is the only thing that is important for you to understand. You can be great in your profession, you can earn a lot of money, you can be famous, but the question is what are you doing for others."

In fact, the First Lady told the students that they are a lot of lessons they can take away from this film (which, she noted, both she and President Obama found "very powerful" when they watched it over the weekend):

This isn’t just about watching a wonderful movie about an important moment in history, this is about helping all of you believe that you can write your own history.

And I can't say this enough to enough young people -- you might not be able to hit a ball like Jackie Robinson, but you can get your education. In fact, you must get your education and demand more of yourself every single day. You have to do that, and you have to pick up yourself when somebody knocks you down -- because you will get knocked down. But to do all of that, you have to put the work in...

All of this is about hard work. And you have to be willing to face any obstacle you might encounter along the way.  That's what Jackie and Rachel Robinson did, and the same could be said for all the folks on this stage, quite frankly.

Before he became an actor, Harrison Ford had to overcome a crippling fear of speaking in front of an audience. So he’s terrified right now. And it took Chadwick 10 years of hard work before landing his first starring role. So this stuff doesn't come easy. And then Brian sits down to create a script, and that means hundreds of hours of writing and rewriting, painful doubting and rewriting -- oh, you can see the pain -- before he comes up with a finished product. And that's really the secret.

And I want all young people to understand -- what does it take?  What does it take? What’s the secret? The secret is that no one comes out a finished product. None of us are finished products. There is no magic that makes someone an actor or a director or a doctor or a lawyer or a President or First Lady. There is no magic. That is the one thing I want you all to understand. If you gain nothing from this movie or any of our lives, there is no magic. It takes grit. It takes determination and a whole lot of hard work. And as you know in the movie, it takes guts.

And then I want you all to put your heart and soul into everything you do -- every single thing you do.

You can watch the entire workshop below or on youtube: