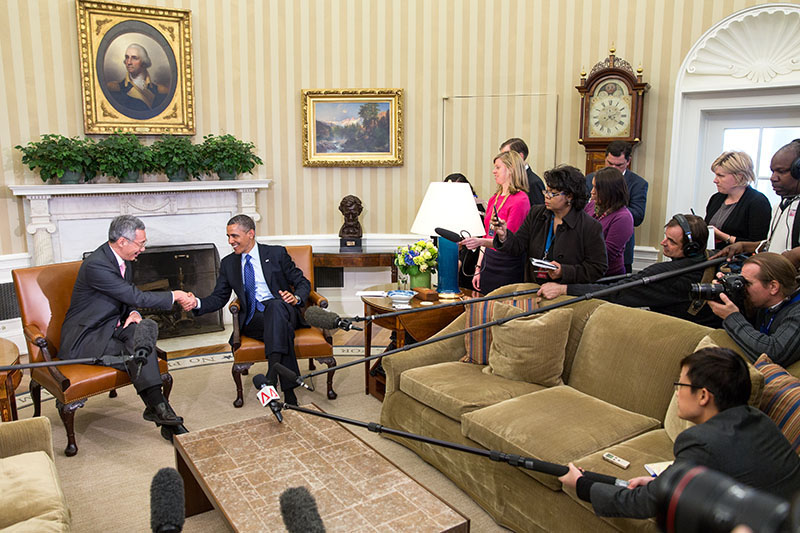 President Barack Obama delivers remarks with Prime Minister Lee Hsien Loong of the Republic of Singapore prior to a bilateral meeting in the Oval Office, April 2, 2013. (Official White House Photo by Lawrence Jackson)

In a bilateral meeting today with Prime Minister Lee Hsien Loong of Singapore, President Obama reaffirmed America's commitment to a secure and prosperous Asia-Pacific region, and thanked Prime Minster Lee for being “an outstanding partner for us on the international stage.”

In addition to close military cooperation between the two countries that allows the United States to maintain an effective presence the Pacific, Singapore is also a strong economic partner.

“Over the last decade, since we signed our free trade agreement, we have seen a doubling of trade between our countries, and that creates jobs here in the United States as well as in Singapore,” the President said.

President Obama called Singapore’s development and progress over the last several decades an example for many countries around the world. As leaders in the region, the country has provided a “steady vision of how countries in the Pacific region can cooperate effectively for the prosperity and security of all” while promoting the “rules of the road and international norms that the United States strongly supports.”

President Obama added that there are very few world leaders who I am more appreciative of in terms of their advice and counsel and thoughtful analysis than Prime Minister Lee.”

And as we continue the process that we called rebalancing when I first came into office, we’ve continued to seek out the advice and good counsel of Singapore in how to effect that in a way that creates not only strong security, but also increase prosperity for both the United States and the countries of the region.