April 5, 2013 at 9:45 AM ET by Alan Krueger, Alan B. Krueger
Twitter Facebook Email
Summary:
Today’s report from the Bureau of Labor Statistics shows that private sector businesses added 95,000 jobs last month. The economy has now added private sector jobs every month for 37 straight months, and a total of nearly 6.5 million jobs have been added over that period.

While more work remains to be done, today’s employment report provides further evidence that the U.S. economy is continuing to recover from the worst downturn since the Great Depression. It is critical that we continue the policies that are helping to build an economy that creates jobs and works for the middle class as we dig our way out of the deep hole that was caused by the severe recession that began in December 2007.

Today’s report from the Bureau of Labor Statistics (BLS) shows that private sector businesses added 95,000 jobs last month. Total non-farm payroll employment rose by 88,000 jobs in March. The February and March employment numbers were revised up by a total of 61,000 jobs. The economy has now added private sector jobs every month for 37 straight months, and a total of nearly 6.5 million jobs has been added over that period.

The household survey showed that the unemployment rate fell from 7.7 percent in February to 7.6 percent in March, the lowest since December 2008. The labor force participation rate decreased by 0.2 percentage point to 63.3 percent in March.

It is important to bear in mind that the March household and payroll surveys are the first monthly surveys to look at employment since the beginning of sequestration.  While the recovery was gaining traction before sequestration took effect, these arbitrary and unnecessary cuts to government services will be a headwind in the months to come, and will cut key investments in the Nation’s future competitiveness.  The Congressional Budget Office has estimated that the sequester will reduce employment by 750,000 full-time equivalent jobs by the end of the year.

Now is not the time for Washington to impose more self-inflicted wounds on the economy.  The Administration continues to urge Congress to replace the sequester with balanced deficit reduction, while working to put in place measures to put more Americans back to work like rebuilding our roads and bridges and promoting American manufacturing.  The President will continue to press Congress to act on measures he called for in the State of the Union to promote job growth, ensure workers have the skills they need to compete, and help hardworking Americans make a decent living.

According to the establishment survey, in March employment rose notably in professional and business services (+51,000), education and health services (+44,000), construction (+18,000), and leisure and hospitality (+17,000).  Retail trade lost 24,100 jobs in March, following 8 months of growth.  Job gains in construction have added 169,000 jobs since September.  In the last two years the construction sector has added 317,000 jobs, with over half of that increase occurring in the last six months. 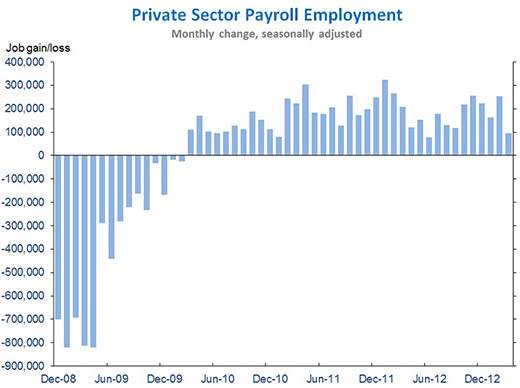 Alan B. Krueger is Chairman of the Council of Economic Advisers.