April 8, 2013 at 8:05 PM ET by Megan Slack
Twitter Facebook Email
Summary:
President Obama today told families of the children and teachers who died at Sandy Hook Elementary that we have not forgotten our promise to help prevent future tragedies and reduce gun violence in our country.

Today President Obama traveled to Connecticut, where he told families of the children and teachers who died at Sandy Hook Elementary that we have not forgotten our promise to help prevent future tragedies and reduce gun violence in our country.

Your families still grieve in ways most of us can’t comprehend. But so many of you have used that grief to make a difference -- not just to honor your own children, but to protect the lives of all of our children. So many of you have mobilized, and organized, and petitioned your elected officials … as citizens determined to right something gone wrong.

And last week, here in Connecticut, your elected leaders responded. The Connecticut legislature, led by many of the legislators here today, passed new measures to protect more of our children and our communities from gun violence. And Governor Malloy signed that legislation into law.

So I want to be clear. You, the families of Newtown, people across Connecticut, you helped make that happen. Your voices, your determination made that happen. Obviously, the elected leaders did an extraordinary job moving it forward, but it couldn’t have happened if they weren’t hearing from people in their respective districts, people all across the state. That's the power of your voice.

“So Connecticut has shown the way,” he said. “And now is the time for Congress to do the same.” 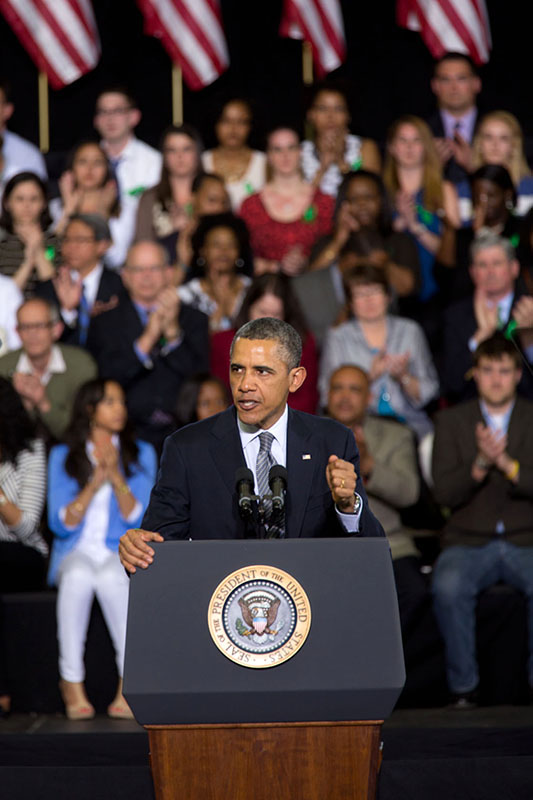 In January, President Obama announced a series of executive actions that will help keep our kids and communities safe, and put forward a set of commonsense proposals for Congress to consider that can make a real difference in protecting our citizens from gun violence. But they are only going to act on them if they hear from the American people, President Obama said today.

We have to stand up and speak out, President Obama said, if there is even one thing we can do to protect our kids.

And if you believe that, I'm asking you to stand up. If you believe in the right to bears arms, like I do, but think we should prevent an irresponsible few from inflicting harm -- stand up. Stand up.