April 10, 2013 at 11:31 AM ET by Colleen Curtis
Twitter Facebook Email
Summary:
This year's Budget presents the President's plan to address these important questions: How do we attract more jobs to our shores? How do we equip our people with the skills needed to do those jobs? And how do we make sure that hard work leads to a decent living? 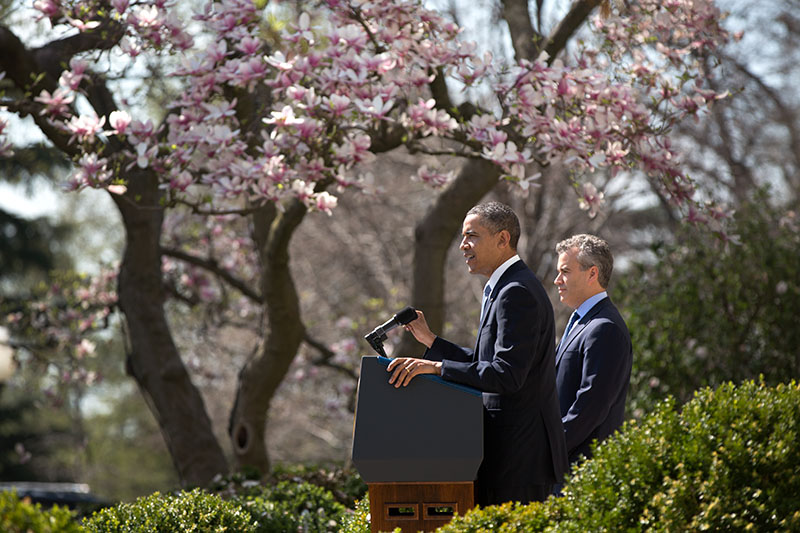 In his 2013 State of the Union address, President Obama said that we must invest in the true engine of America’s economic growth – a rising and thriving middle class.  He said that every day, we must ask ourselves these three questions:  "How do we attract more jobs to our shores? How do we equip our people with the skills needed to do those jobs? And how do we make sure that hard work leads to a decent living?"

This morning the President sent Congress his Budget for Fiscal Year 2014, which presents his plan to address each of these questions. He also spoke to the press about his proposal in the Rose Garden, and said that while our economy is poised for progress, we need to get smarter about our priorities as a nation. And that’s what his 2014 Budget represents -- a fiscally-responsible blueprint for middle-class jobs and growth:

To make America a magnet for good jobs, this budget invests in new manufacturing hubs to help turn regions left behind by globalization into global centers of high-tech jobs.  We’ll spark new American innovation and industry with cutting-edge research like the initiative I announced to map the human brain and cure disease. We’ll continue our march towards energy independence and address the threat of climate change. And our Rebuild America Partnership will attract private investment to put construction workers back on the job rebuilding our roads, our bridges and our schools, in turn attracting even more new business to communities across the country.

To help workers earn the skills they need to fill those jobs, we’ll work with states to make high-quality preschool available to every child in America. And we’re going to pay for it by raising taxes on tobacco products that harm our young people. It’s the right thing to do.

We’ll reform our high schools and job training programs to equip more Americans with the skills they need to compete in the 21st century economy. And we’ll help more middle-class families afford the rising cost of college.

To make sure hard work is rewarded, we’ll build new ladders of opportunity into the middle class for anybody who is willing to work hard to climb them. So we’ll partner with 20 of our communities hit hardest by the recession to help them improve housing, and education, and business investment. And we should make the minimum wage a wage you can live on -- because no one who works full-time should have to raise his or her family in poverty.

President Obama's budget also replaces the across-the-board spending cuts known as the sequester with smarter ones, making long-term reforms, eliminating actual waste and programs that are no longer needed.

Watch President Obama discuss his 2014 Budget below or on YouTube:

You can read President Obama's Budget for Fiscal Year 2014