April 10, 2013 at 1:49 PM ET by Rafael Lemaitre
Twitter Facebook Email
Summary:
To reduce the significant burden of our Nation’s drug problem on our people and our economy, the President’s Budget supports a 21st century approach to drug policy that acknowledges drug use is a public health issue, not just a criminal justice one.

Today, the President released a Budget that shows how we can invest in the things we need to grow our economy, create jobs, and strengthen the middle class while further reducing the deficit in a balanced way.  Everything the President does is geared toward strengthening the middle class by creating jobs and growing the economy. That’s his North Star, and that’s why today’s Budget details how we can invest to attract more jobs to our shores, equip our people with the skills they need, and ensure that hard work leads to a decent living—without adding a dime to the deficit.

Across America, drug use and its consequences place obstacles in the way of the President’s plan to foster healthier, safer, and more prosperous communities.  In fact, in 2007 drug use cost American taxpayers $193 billion in lost productivity, healthcare, and criminal justice costs. There is also a connection between drug use and unemployment.  For example, research indicates that cocaine use tends to lower the likelihood of being employed by 23 to 32 percentage points, while marijuana use lowers it by 15 to 17 points.

To reduce the significant burden of our Nation’s drug problem on our people and our economy, the President’s Budget supports a 21st century approach to drug policy that acknowledges drug use is a public health issue, not just a criminal justice one. Time and again, research has shown that prevention, treatment, early intervention in health settings, and smarter law enforcement efforts, working together, can make a real difference in saving lives and making our Nation safer and stronger. That’s why the Budget the President released today requests $25.4 billion in Fiscal Year 2014 to support evidence-based drug control programs – an increase of about $1 billion over FY 2012.

Most notably, the President’s Budget includes a request for an increase of $1.5 billion over the FY 2012 level to fund drug treatment and prevention services in America – a 16 percent increase over FY 2012.  As a result, the President’s Budget requests more for treatment and prevention – $10.7 billion – than for Federally-funded domestic drug law enforcement and incarceration – $9.6 billion. This is what a 21st century approach to drug policy looks like. 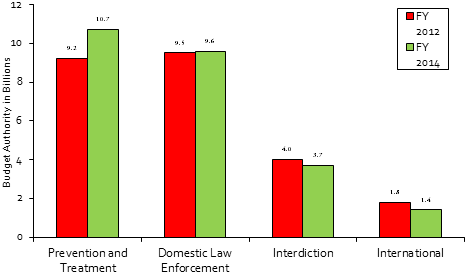 For more details on the President’s drug budget, click here.