April 11, 2013 at 4:29 PM ET by Colleen Curtis
Twitter Facebook Email
Summary:
President Obama bestowed the nation's highest honor on a remarkable man who gave his life serving God and country in the Korean War. Read the story of his incredible bravery. 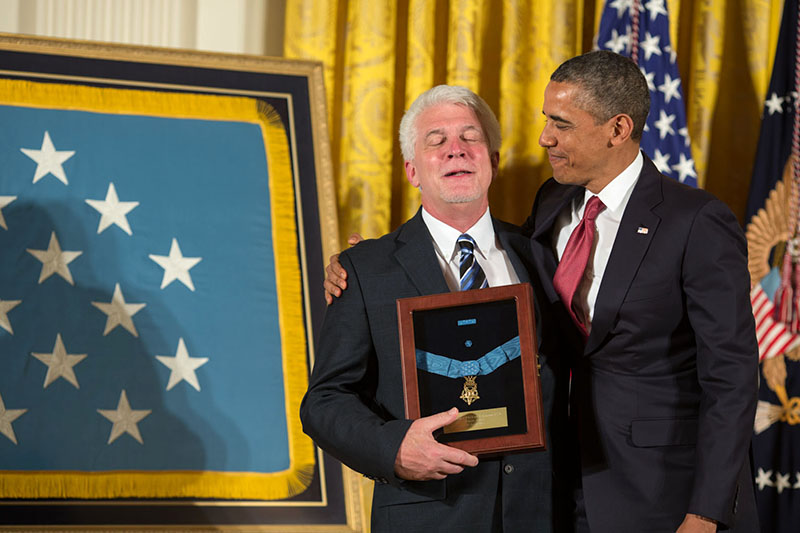 President Barack Obama embraces Ray Kapaun after presenting him with the Medal of Honor awarded posthumously to his uncle, Chaplain (Captain) Emil J. Kapaun, during a ceremony in the East Room of the White House, April 11, 2013. Chaplain Kapaun was awarded the medal for his extraordinary heroism while serving with the 3d Battalion, 8th Cavalry Regiment, 1st Cavalry Division during combat operations against an armed enemy at Unsan, Korea and as a prisoner of war from November 1-2, 1950. (Official White House Photo by Pete Souza)

Today in the East Room, President Obama told the story of Emil Kapaun, an Army Chaplain from Kansas who served in the US Army during the Korean War. It's a powerful story, and probably best told in the President's own words:

"After the Communist invasion of South Korea, [Father Kapaun] was among the first American troops that hit the beaches and pushed their way north through hard mountains and bitter cold. In his understated Midwestern way, he wrote home, saying, “this outdoor life is quite the thing” and “I prefer to live in a house once in a while.” But he had hope, saying, “It looks like the war will end soon.”

That’s when Chinese forces entered the war with a massive surprise attack -- perhaps 20,000 soldiers pouring down on a few thousand Americans. In the chaos, dodging bullets and explosions, Father Kapaun raced between foxholes, out past the front lines and into no-man’s land -- dragging the wounded to safety.

When his commanders ordered an evacuation, he chose to stay -- gathering the injured, tending to their wounds. When the enemy broke through and the combat was hand-to-hand, he carried on -- comforting the injured and the dying, offering some measure of peace as they left this Earth.

When enemy forces bore down, it seemed like the end -- that these wounded Americans, more than a dozen of them, would be gunned down. But Father Kapaun spotted a wounded Chinese officer. He pleaded with this Chinese officer and convinced him to call out to his fellow Chinese. The shooting stopped and they negotiated a safe surrender, saving those American lives.

This is the valor we honor today -- an American soldier who didn’t fire a gun, but who wielded the mightiest weapon of all, a love for his brothers so pure that he was willing to die so that they might live. And yet, the incredible story of Father Kapaun does not end there.

He carried that injured American, for miles, as their captors forced them on a death march. When Father Kapaun grew tired, he’d help the wounded soldier hop on one leg. When other prisoners stumbled, he picked them up. When they wanted to quit -- knowing that stragglers would be shot -- he begged them to keep walking.

In the camps that winter, deep in a valley, men could freeze to death in their sleep. Father Kapaun offered them his own clothes. They starved on tiny rations of millet and corn and birdseed. He somehow snuck past the guards, foraged in nearby fields, and returned with rice and potatoes. In desperation, some men hoarded food. He convinced them to share. Their bodies were ravaged by dysentery. He grabbed some rocks, pounded metal into pots and boiled clean water. They lived in filth. He washed their clothes and he cleansed their wounds.

The guards ridiculed his devotion to his Savior and the Almighty. They took his clothes and made him stand in the freezing cold for hours. Yet, he never lost his faith. If anything, it only grew stronger. At night, he slipped into huts to lead prisoners in prayer, saying the Rosary, administering the sacraments, offering three simple words: “God bless you.” One of them later said that with his very presence he could just for a moment turn a mud hut into a cathedral. 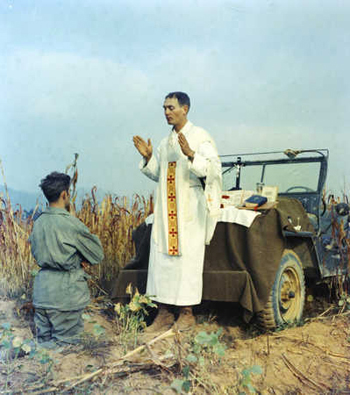 That spring, he went further -- he held an Easter service. As the sun rose that Easter Sunday, he put on [his] purple stole and led dozens of prisoners to the ruins of an old church in the camp. And he read from a prayer missal that they had kept hidden. He held up a small crucifix that he had made from sticks. And as the guards watched, Father Kapaun and all those prisoners -- men of different faith, perhaps some men of no faith -- sang the Lord’s Prayer and “America the Beautiful.” They sang so loud that other prisoners across the camp not only heard them, they joined in, too -- filling that valley with song and with prayer.

That faith -- that they might be delivered from evil, that they could make it home -- was perhaps the greatest gift to those men; that even amidst such hardship and despair, there could be hope; amid their misery in the temporal they could see those truths that are eternal; that even in such hell, there could be a touch of the divine. Looking back, one of them said that that is what “kept a lot of us alive.”

Yet, for Father Kapaun, the horrific conditions took their toll. Thin, frail, he began to limp, with a blood clot in his leg. And then came dysentery, then pneumonia. That’s when the guards saw their chance to finally rid themselves of this priest and the hope he inspired. They came for him. And over the protests and tears of the men who loved him, the guards sent him to a death house -- a hellhole with no food or water -- to be left to die.

And yet, even then, his faith held firm. “I’m going to where I’ve always wanted to go,” he told his brothers. “And when I get up there, I’ll say a prayer for all of you.” And then, as he was taken away, he did something remarkable -- he blessed the guards. “Forgive them,” he said, “for they know not what they do.” Two days later, in that house of death, Father Kapaun breathed his last breath. His body was taken away, his grave unmarked, his remains unrecovered to this day.

The President was speaking to an audience that included several of Father Kapaun's relatives, as well as a number of the American heroes who served alongside him—veterans and former POWs from the Korean War. They came to the White House to witness President Obama bestow our nation’s highest military decoration, the Medal of Honor, on Emil Kapaun six decades after his death.  As one of Father Kapaun’s comrades said when he heard the news, “it’s about time.”

*** Photo of Father Emil Kapaun celebrating Mass during the Korean War using the hood of a Jeep as his altar, Oct 7, 1950. Less than a month later, Kapaun would, without regard for his own life, save a fellow Soldier from certain death/Courtesy US Army

Watch a video of the entire ceremony below or on YouTube: