April 15, 2013 at 5:53 AM ET by Colleen Curtis
Twitter Facebook Email
Summary:
Understand how and where your tax dollars are being spent.

It’s April 15th, Tax Day. Millions of families all across the country have already filed their taxes or maybe some folks are just getting around to it today. Whether you’ve planned ahead or rushing to get them done, you deserve to know how your tax dollars are being spent.

In his 2011 State of the Union Address, President Obama promised that, for the first time ever, American taxpayers would be able to go online and see exactly how their federal tax dollars are spent. And for the third year in a row, he’s keeping that promise. As long as he’s in office, every hardworking taxpayer will be able to jump online to see exactly how their tax dollars are being spent.

Just enter a few pieces of information below, and the Taxpayer Receipt will give you a breakdown of how your tax dollars are spent on priorities like education, veterans benefits, or health care. The online tool has been updated to reflect current spending.

The President believes the economy grows best from the middle out, not from the top down.  That’s why he fought to make the middle class income tax cuts permanent. Additionally, millions of folks continue to be able to take advantage of things like the American Opportunity Tax Credit, and the expansions to the Earned Income Tax Credit and the Child Tax Credit. There’s more work to be done to strengthen the economy, the President will continue to do everything he can to make investments that’ll grow the economy and strengthen the middle class while taking a balanced approach to reduce the deficit to ensure every American has a shot at the American dream.

Understand how and where your tax dollars are being spent 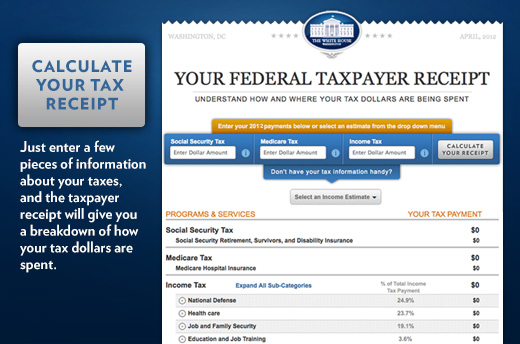