In the Face of Evil, Boston Has Shown that Americans Will Lift Up What Is Good

April 18, 2013 at 12:29 PM ET by Colleen Curtis
Twitter Facebook Email
Summary:
President Obama speaks at in interfaith service dedicated to those who were gravely wounded or killed at the Boston Marathon bombing. 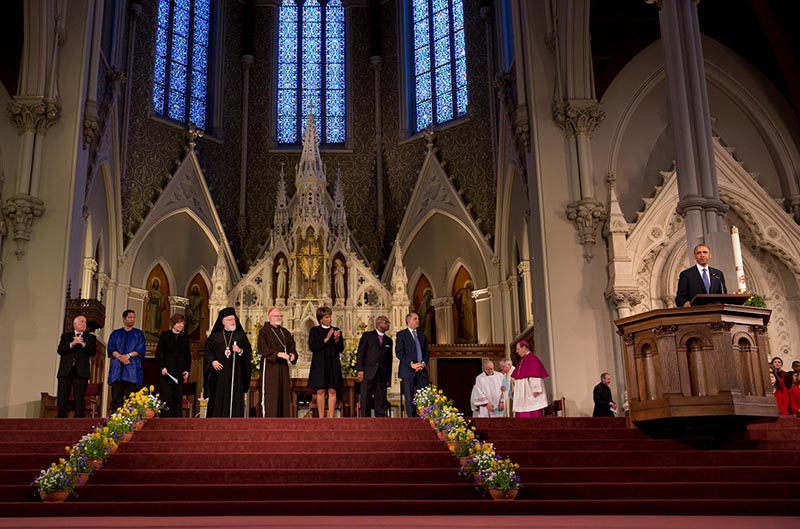 President Barack Obama delivers remarks at an interfaith prayer service at the Cathedral of the Holy Cross in Boston, Mass., April 18, 2013. The service was dedicated to those who were gravely wounded or killed in the bombings in Boston. (Official White House Photo by Lawrence Jackson)

President Obama and First Lady Michelle Obama today were at Boston's Cathedral of the Holy Cross to attend Healing Our City, an interfaith service dedicated to those who were gravely wounded or killed in Monday’s bombing near the finish line of the Boston Marathon.

In his remarks, the President paid tribute to those whose lives were taken by the bomb blasts on Boylston Street -- to Krystle Campbell, 29, who was "always smiling." And to Lingzi Lu, a 23-year-old graduate student from China who had come to "experience all this city has to offer." And finally to Martin Richard, the 8-year-old boy from Dorchester whose mother and sister remain in the hospital, fighting to recover from their own injuries. Martin, said President Obama, leaves us with two enduring images, 'forever smiling for his beloved Bruins, and forever expressing a wish he made on a blue poster board: 'No more hurting people. Peace.'"

President Obama also praised the people of Boston, a city both he and the First Lady once called home. Like thousands every year, the two lived there as students -- just one of the many reasons, the President said, that Boston has a hold on so many hearts. "Every fall, you welcome students from all across America and all across the globe, and every spring you graduate them back into the world -- a Boston diaspora that excels in every field of human endeavor," he said. "Year after year, you welcome the greatest talents in the arts and science, research -- you welcome them to your concert halls and your hospitals and your laboratories to exchange ideas and insights that draw this world together."

In fact, the President said, whichever terrorists are behind the attack on Monday picked the wrong city as a target, because Boston will not be terrorized or intimidated:

Scripture teaches us, “God has not given us a spirit of fear and timidity, but of power, love, and self-discipline.” And that’s the spirit you’ve displayed in recent days.

When doctors and nurses, police and firefighters and EMTs and Guardsmen run towards explosions to treat the wounded -- that’s discipline.

When exhausted runners, including our troops and veterans -- who never expected to see such carnage on the streets back home  -- become first responders themselves, tending to the injured -- that’s real power.

When Bostonians carry victims in their arms, deliver water and blankets, line up to give blood, open their homes to total strangers, give them rides back to reunite with their families -- that’s love.

That’s the message we send to those who carried this out and anyone who would do harm to our people.  Yes, we will find you.  And, yes, you will face justice. We will find you. We will hold you accountable.  But more than that; our fidelity to our way of life -- to our free and open society -- will only grow stronger. For God has not given us a spirit of fear and timidity, but one of power and love and self-discipline.

After the service, President and Mrs. Obama stopped by Boston's Cathedral High School to thank some of Boston's first responders and volunteers for their tireless efforts over the past few days, and then the President visited patients, their families and hospital staff at Massachusetts General Hospital, while the First Lady stopped by Boston Children’s Hospital and Brigham and Women’s Hospital.

You can watch President Obama's remarks below or on YouTube: