April 22, 2013 at 5:57 PM ET by Becky Fried
Twitter Facebook Email
Summary:
100 students from more than 40 states were at the White House for an all-day, hands-on celebration of the power and potential of science, technology, engineering, and math (STEM) education.

President Obama today celebrated the remarkable achievements of student science fair winners and extraordinary kid innovators from across the nation in the third White House Science Fair. The Fair brought 100 students from more than 40 states to an all-day, hands-on celebration of the power and potential of science, technology, engineering, and math (STEM) education.

As the President said in 2009, when he announced the first-ever White House Science Fair, “If you win the NCAA championship, you come to the White House. Well, if you're a young person and you've produced the best experiment or design, the best hardware or software, you ought to be recognized for that achievement, too.” 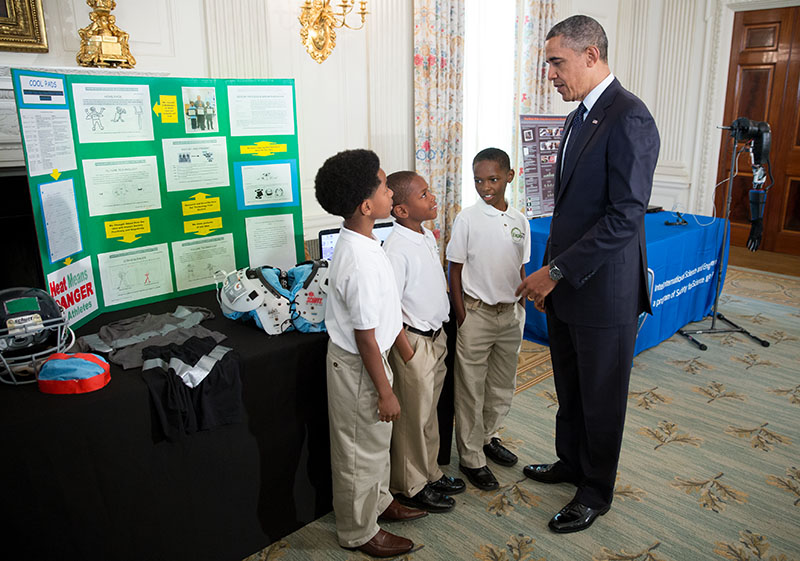 That’s why young inventors of everything from portable windmills to oil-producing algae, and from underwater robots to dehydration-preventing football gear were invited to share their wares at all corners of the White House -- from the South Lawn to the State Dining Room -- for today's event. The cohort of kids included app-coders, rocket-builders, video-game designers, and city-planners—many of them, as the President pointed out, not yet old enough to drive. One team of innovators even helped the President hop onto a bike and test out their pedal-powered water filtration system.

After touring exhibits, the President congratulated the students on their extraordinary accomplishments and announced a number of ambitious new steps to advance his Educate to Innovate campaign—an all-hands-on-deck effort to get more girls and boys inspired about STEM and ensure we are doing everything we can to equip the Nation’s future innovators:

We've got to do everything we can to make sure that we are giving these young people opportunity to pursue their studies and discover new ways of doing things. And we've got to make sure that we're also leaving behind a world that is safer and cleaner and healthier than the one we found. That’s our obligation.

The steps announced today include the launch, this year, of a new AmeriCorps track focused on STEM Education; the launch, by ten leading education non-profits and U.S.. technology companies, of US2020—a campaign encourage companies to commit 20 percent of their STEM employees to 20 hours per year of mentoring or teaching by the year 2020; and an announcement of more than 1,000 summer learning events planned as part of the upcoming Summer of Making and Connecting program supported by the MacArthur Foundation; among others.

President Obama thanked parents, teachers, and mentors in the audience for their continuing roles in supporting students’ spirits of curiosity, creativity, and imagination. And, after repeatedly marveling at some of the amazing innovations represented at this year’s Science Fair (including a pancreatic cancer screening tool that is cheaper and more accurate than any on the market) — the President spoke to the students directly, saying simply, “we could not be prouder of all of you.”