President Obama Honors the 2013 National Teacher of the Year 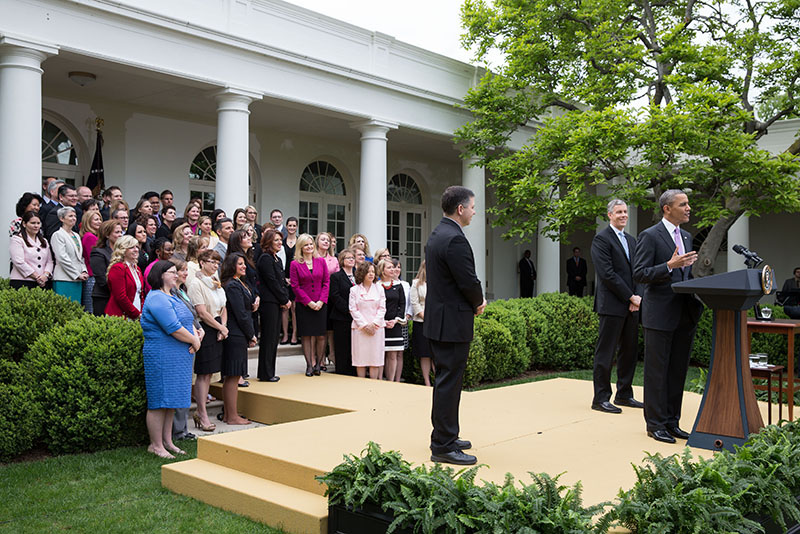 President Barack Obama, with Education Secretary Arne Duncan, honors 2013 National Teacher of the Year Jeff Charbonneau, State Teachers of the Year, and Principals of the Year, in the Rose Garden of the White House, April 23, 2013. (Official White House Photo by Pete Souza)

Twelve years ago, Zillah High School in Washington state had no engineering classes. The science curriculum was lagging behind, and students had to go off campus to take technology classes.

Jeff Charbonneau, who returned to his hometown 11 years ago to teach at Zillah High, was determined to change that. And he did. Science enrollment is way up. Kids are graduating with college-level science credits. The school expects to have to hire more teachers now to meet the demand.

And today, President Obama honored Jeff as the 2013 National Teacher of the Year.

Jeff teaches chemistry, physics, and engineering, and works to create accessible, interactive lessons that help convince kids that the science classes most students consider hardest are worth diving in to, not running away from. But President Obama said that it’s not just his work in the classroom that distinguishes Jeff.

“He started an outdoors club,” President Obama said. “He brought his passion to the drama program. He’s even helping out other schools.” Because of Jeff, hundreds of students all over Washington are now participating in high-skills robotics competitions and gaining valuable engineering experience.

“There’s nothing that Jeff will not try to give his students the best education in every respect,” President Obama said.

They understand that their job is more than teaching subjects like reading or chemistry. They’re not just filling blackboards with numbers and diagrams. In classrooms across America, they’re teaching things like character and compassion and resilience and imagination. They’re filling young minds with virtues and values, and teaching our kids how to cooperate and overcome obstacles.

President Obama thanked Jeff and his fellow educators for their hard work and commitment to America's young people.

What you do matters. It's critical to our success as a country, but most importantly, it's critical to those kids themselves. I cannot think of something more important than reaching that child who maybe came in uninspired, and suddenly, you've inspired them.

“Teaching is a profession and it should be treated like one,” President Obama said.

Educators like Jeff and everyone up here today, they represent the very best of America -- committed professionals who give themselves fully to the growth and development of our kids. And with them at the front of the classroom and leading our schools, I am absolutely confident that our children are going to be prepared to meet the tests of our time and the tests of the future.