Advance Estimate of GDP for the First Quarter of 2013

April 26, 2013 at 9:30 AM ET by Alan Krueger, Alan B. Krueger
Twitter Facebook Email
Summary:
Over the last fifteen quarters, the economy has expanded by 8.3 percent overall, and the private components of GDP have grown by 12.2 percent. Real GDP is now 3.2 percent larger than it was at the previous business cycle peak in 2007:Q4.

Today’s report indicates that the economy posted its fifteenth straight quarter of positive growth, as real GDP (the total amount of goods and services produced in the country) grew at a 2.5 percent annual rate in the first quarter of this year, according to the “advance” estimate released by the Bureau of Economic Analysis. Over the last fifteen quarters, the economy has expanded by 8.3 percent overall, and the private components of GDP have grown by 12.2 percent. Real GDP is now 3.2 percent larger than it was at the previous business cycle peak in 2007:Q4. While there is more work to be done, this report, together with other economic indicators, provides further evidence that the economy is moving forward in the right direction.

It is important to recognize that GDP is made up of various components. Personal consumption expenditures, for example, rose by 3.2 percent at an annual rate in 2013:Q1, the fastest rate in over two years. Residential investment grew by 12.6 percent last quarter and has increased for eight quarters in a row, its longest streak since 2004-2005. Federal defense spending fell 11.5 percent at an annual rate in 2013:Q1, while federal nondefense spending declined at a 2.0 percent rate and state and local government purchases fell at a 1.2 percent rate.

The “advance" estimate of first quarter GDP growth encompasses the first month after sequestration began on March 1. It is likely that the contraction in Federal defense and non-defense spending, at least in part, reflects the onset of sequestration. These arbitrary and unnecessary cuts to government services will be a headwind in the months to come, and will cut key investments in the nation’s future competitiveness. The Congressional Budget Office has estimated that the sequester will reduce GDP growth by 0.6 percentage point for the year.

Now is not the time for Washington to impose self-inflicted wounds on the economy. The Administration continues to urge Congress to replace the sequester with balanced deficit reduction, while working to put in place measures to put more Americans back to work, like rebuilding our roads and bridges and promoting American manufacturing. The President will continue to work with Congress to act on measures he called for in the State of the Union to promote job growth, ensure workers have the skills they need to compete, and help hardworking Americans make a decent living. 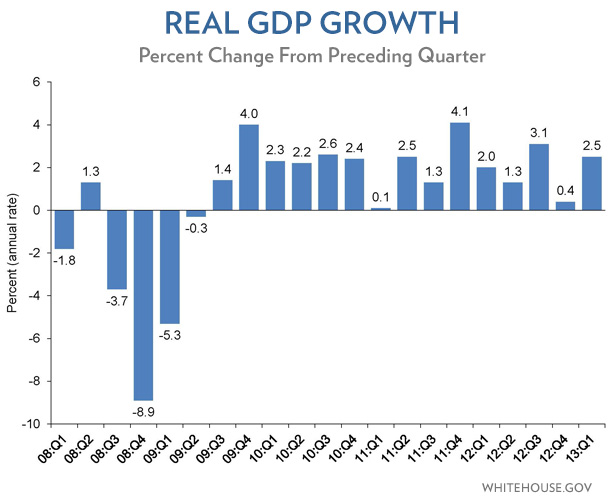 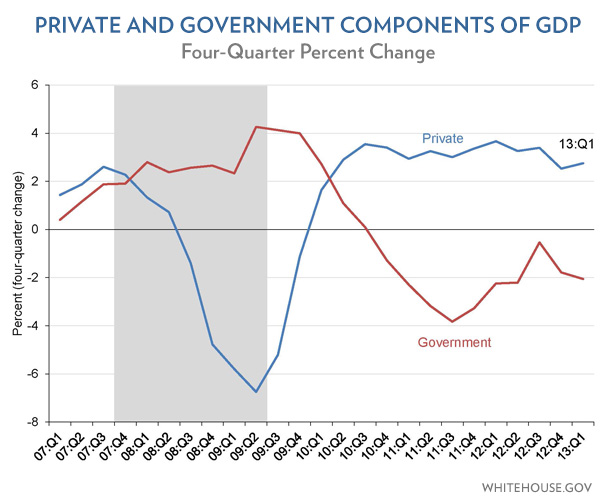 Alan B. Krueger is the Chairman of the Council of Economic Advisors