April 26, 2013 at 5:30 PM ET by Colleen Curtis
Twitter Facebook Email
Summary:
The main topic on today's agenda was the ongoing crisis in Syria, including the impact it is having on Jordan and the reports that chemical weapons may have been used on Syrian citizens. 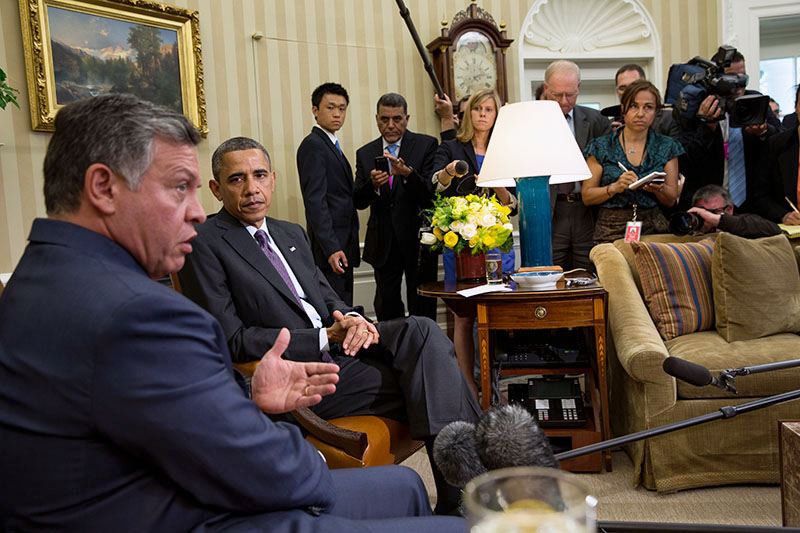 President Barack Obama and King Abdullah II of Jordan make statements to the press prior to a bilateral meeting, in the Oval Office, April 26, 2013. (Official White House Photo by Pete Souza)

President Obama today welcomed His Majesty King Abdullah II of Jordan to the White House, where the two leaders once again discussed the very urgent issues impacting that country, and the rest of the world.

President Obama met with the Jordanian leader last month on his trip to the Middle East, and this afternoon he thanked the King for his "extraordinary" hospitality, and praised his efforts to foster democratization, entrepreneurship and economic development inside Jordan. In remarks to the press before their bilateral meeting, the President said that he believes Jordan can be an "extraordinary model for effective governance in the region."

But the main topic on today's agenda was the ongoing crisis in Syria, including the impact it is having on Jordan, which has seen more than half a million refugees cross their border to escape the violence in their own country. The President addressed the reports that chemical weapons may have been used on the citizens of Syria and promised that the U.S and our partners in the region would pursue a "very rigorous investigation" of the evidence:

We have to act prudently. We have to make these assessments deliberately. But I think all of us, not just in the United States but around the world, recognize how we cannot stand by and permit the systematic use of weapons like chemical weapons on civilian populations.

So this is going to be something that we’ll be paying a lot of attention to -- trying to confirm, and mobilize the international community around those issues.

You can watch a video of the President and King Abdullah speaking to the press below or on YouTube: