April 29, 2013 at 5:06 PM ET by Colleen Curtis
Twitter Facebook Email
Summary:
The IT Training and Certification Partnership will enable thousands of service members to earn industry-recognized information technology (IT) certifications before they transition from military service. 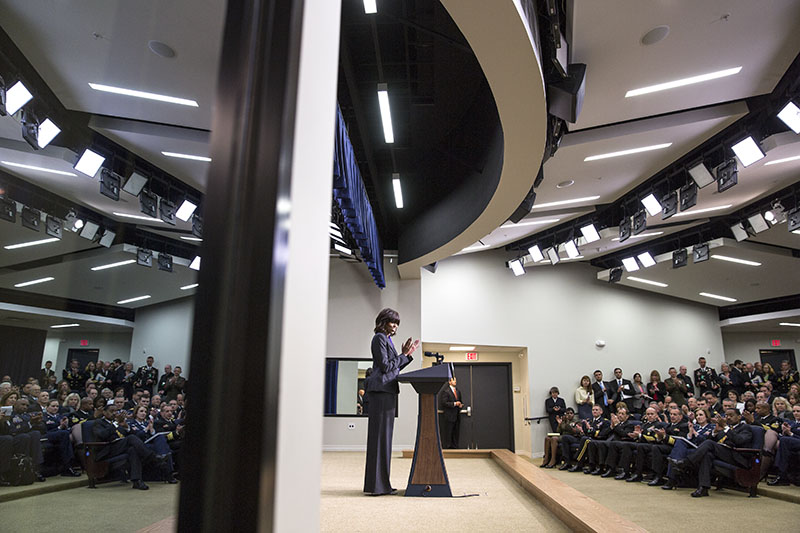 In the ongoing effort to help our servicemembers and veterans transition from active duty service to the civilian job market, the White House today invited leaders from the private sector, the military services, industry trade associations, unions, educational institutions, state legislatures, veteran service organizations, and state licensing boards for a forum on military credentialing and licensing.

At the event, First Lady Michelle Obama announced the launch of the IT Training and Certification Partnership, a new public-private program that addresses an issue that can prevent our troops from gaining employment in the private sector: Active military personnel typically do not have the industry-recognized certifications that reflect the IT skills and expertise they gained through their military service.

Today’s announcement is the second major partnership developed through the Military Credentialing and Licensing Task Force, which was established last June by the Department of Defense at President Obama’s direction. The new Partnership will provide opportunities for up to 161,000 service members to gain industry-recognized, nationally portable certifications necessary for 12 high-demand technology professions, including computer programmers, quality assurance engineers, and IT security analysts. The targeted professions are expected to generate more than 1.8 million job opportunities by 2020, and have an average annual salary of more than $81,000. Their high-quality military training assures that our veterans have the skill sets that employers demand to fill these positions

In her remarks, Mrs. Obama praised the leaders who created the Partnership, saying  their efforts will "make the world of difference to hundreds of thousands of veterans and military families across this country."

The First Lady also explained that hiring exiting servicemen and women isn't just the right thing to do, it's also a smart business decision:

[Our veterans] do everything. They are medics and engineers, they're drivers, welders... And they are eminently qualified to do the very jobs that employers across this country are desperate to fill.

But too often, because of red tape, or outdated rules, or simple lack of coordination, our men and women in uniform come home only to find that the training and experience they’ve gotten during their time in uniform simply doesn’t count.  Or they discover that the credits that they’ve earned in military courses don’t actually transfer when they enroll in college, so they’re turned away from jobs that they’re more than qualified to do. Or they wind up paying to do the same coursework over again, and all that training, all that education, all that expertise that they have devoted their lives to attain, it all goes to waste.

And this is unfair to the men and women who have served this country so bravely. They deserve a fair shot at a good job when they come home. But it’s also unfair to their families who have sacrificed probably more in some instances so that these men and women can do their job. And they deserve some financial security once they return to civilian life.

It is also unfair to this country, because when we don’t take advantage of the skills and talents of our veterans and military spouses, jobs go unfilled and, far worse, human potential goes untapped. And that’s bad for our economy, as we all know.

Today's event also featured four roundtables where plans were discussed to launch additional public-private initiatives that will streamline the ability of service members and veterans to earn the civilian certifications and licenses required for high-demand jobs in emergency medical services, healthcare, and transportation sectors as well as streamline the ability for service members and veterans to translate military experience into academic credit.

Learn more about the Obama Administration's efforts to help our exiting servicemen and women transition to the civilian workforce through Joining Forces.

Read the Fact Sheet about the IT Certification and Training Partnership